A crucial week at IMO 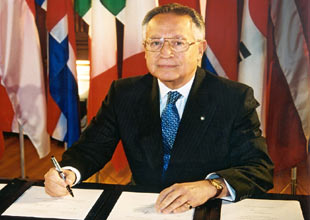 All meetings of the International Maritime Organization (IMO) are important. Why not, as what takes place in these committee and sub-committee meetings will ultimately affect almost every commercial ship in the world?

A crucial week at IMO

All meetings of the International Maritime Organization (IMO) are important. Why not, as what takes place in these committee and sub-committee meetings will ultimately affect almost every commercial ship in the world?

But this current meeting, the 57th meeting of the Marine Environment Protection Committee, which began on Monday, will be regarded as specially crucial, not least by those who are not taking part in it.

This of course is the meeting that is focusing on a number of important environmental challenges, but with particular emphasis on the measures to be taken by the shipping industry to tackle exhaust gas emissions through the revision of MARPOL Annex VI, and greenhouse gases.

It is also a chance for industry to correct much of the erroneous propaganda that has been flying around, notably in the media, and with politicians and certain regulators suggesting that the environmental record of the shipping industry is worse than has been claimed.

The recent criticism of the shipping industry, which was presented to the general public as cavalier with its environmental responsibilities, provoked IMO Secretary-General Efthimios Mitropoulos into a strong defence of the industry"s stance on the environment in his opening speech to the MEPC. He denounced the notion that the shipping industry was being forced to act by others, noting that the maritime community works hard ?to champion and sustain a healthy and green environment?.

It was entirely wrong to suggest that shipping was only making these moves ?for fear that others will act if we fail to ourselves?. The maritime community, he emphasised, was represented by responsible citizens of this planet, who saw it as their duty to play a responsible part in caring for the marine environment.
It is perhaps not surprising that the Secretary-General of IMO felt that such an intervention was necessary to encourage the delegates to redouble their efforts, and by doing so, to prove these accusations nonsensical. Such progress would effectively be forcing the critics, who have threatened regional and local action and suggested that there was doubt about IMO"s mission in this respect, to eat their words.

At the same time there is a certain sense that the shipping industry is under what might be thought of as unfair scrutiny, perhaps because it is ?over the horizon? and thus mostly invisible to the public, that it is an appealing target for people who might be hesitant about tackling the bigger polluters. Everyone knows about the emissions from power stations or road vehicles, because they see them. Ships are beyond their daily comprehension, so when somebody starts alleging that they are major polluters and must be drastically constrained by strict regulation, it is seen to be a response that will somehow be without cost or pain to the ordinary man or woman in the street.
Because emissions are smelt and felt locally, there is also a tendency for powerful pressure groups to focus on this target of shipping in places where ships congregate - in large ports. Local solutions are energetically sought, and these attract political and media support mostly from people who have probably never ever heard of the International Maritime Organization or the concept that an international transport industry needs international regulation if it is to function properly.

So when popular newspapers or broadcast media start making wrongful claims about the contribution of shipping to harmful atmospheric emissions, people do not know that they are being grossly misled. It is perhaps just one further consequence of the shipping industry"s invisibility. But this week, it is hoped, progress which will underline the industry"s sense of responsibility will take place.

This news is a total 1525 time has been read