A game of risk: the Indian Ocean’s most strategically important ports 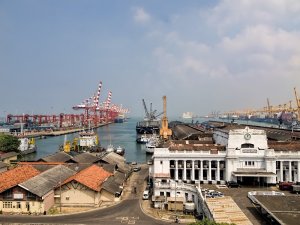 Home to some of the world’s busiest shipping and trade routes, a power struggle is being contested in the Indian Ocean between China and other Asian countries.

Accounting for around half of the world’s container traffic, a third of its cargo bulk and 80% of maritime oil shipments, the Indian Ocean carries enormous strategic importance.

In recent times, no power has done more to monopolise the region’s trade routes quite like China. As part of its Belt and Road initiative, Beijing has invested billions of dollars in infrastructure and ports dotted across the Indian Ocean’s littoral states, from Sri Lanka to the Maldives and Bangladesh.

As China has gone about amassing ownership of these ports – commonly referred to as its “string of pearls” – its Asian neighbours have watched on with consternation. India, in particular, is keen to head off its rival’s naval dominance, which it views as a direct threat to its own influence in the region.

In May, New Delhi signed a memorandum of cooperation with Japan and Sri Lanka to construct a container terminal at the Port of Colombo, one of the region’s key hubs. China already holds the lease on Hambantota, another strategic port in the country, as part of a debt-to-equity swap deal done with the Sri Lankan government.

The formation of this triumvirate is a clear bid to wrest away some of China’s dominance in the Indian Ocean. According to a source close to the project, recently quoted in Reuters, the new terminal will cost around $500 million, with the Sri Lankan government holding a 51% stake. Ground is expected to be broken on the project in March 2020.

From Colombo to Djibouti, these strategic ports bear witness to the ongoing power struggle being played out in the Indian Ocean. Below are five of the region’s key hubs:

Around 90% of Sri Lanka’s seaborne goods pass through the Port of Colombo, the country’s largest port, situated on the shores of the Kelani River. It is also commonly recognised as South West Asia’s busiest port, accounting for the passage of 6.21 million twenty-foot equivalent units in 2017. India is responsible for around 70% of Colombo’s transhipment business.

Connecting Europe, the Middle East, Africa and Asia, the port has also attracted China’s attention in recent years, as part of Beijing’s One Belt One Road Initiative, with the country owning an 85% stake in Colombo International Container Terminals – currently the only deepwater terminal at the port.

Located on the mouth of the Red Sea, and straddling some of busiest shipping routes in the world, the Port of Djibouti connects Europe, the Far East, the Horn of Africa and the Persian Gulf.

In recent years, the port has been the beneficiary of a number of investments from China Merchants Port Holdings (CMPorts), a Hong Kong-headquartered group. Last year, it was announced that CMPorts was to take control of the port’s Doraleh Container Terminal, a move that raised eyebrows among France, Japan, Italy and the US, who all have military bases in the east African country.

Serving as the island nation’s only maritime hub, the Port of Victoria is of particular strategic importance for India, who last year signed a 20-year pact with the Seychelles government to build new naval facilities on the archipelago.

Situated in the heart of the Indian Ocean, the port is said to be straining under overcapacity, due to an increase in recent years in the number of ships crossing from South Asia and the Gulf to the east coast of Africa.

In June, it was reported that the port is in the process of implementing a new quay – financed by the European Investment Bank – in order to better meet rising trading volumes.

Lying adjacent to the Strait of Hormuz – recognised as one of the world’s most important waterways as a strategic oil route in and out of the Gulf – Gwadar Port has been in Chinese hands since 2015, when it was sold to state-owned China Overseas Port Holding Company (COPHC).

The port is a key cog in the China-Pakistan Economic Corridor scheme, which forms part of Beijing’s One Belt initiative, aiming to connect China to Africa and Europe through a set of multibillion-dollar infrastructure and trade projects. As one of the world’s largest crude importers, of which 80% comes from the Middle East, Gwadar also provides China with a land-based oil supply port.

Iran’s only oceanic port, Chabahar Port is situated on the country’s south-eastern coast in the Gulf of Oman. It represents a key gateway between the Commonwealth of Independent States, India, Pakistan, Afghanistan, Russia and Europe.

In 2016, a trilateral transit agreement was penned by Iran, India and Afghanistan, allowing for easier access of Indian goods to pass through Iran into Afghanistan and beyond. In December 2018, India took over the port’s operations, further consolidating its position in the region.