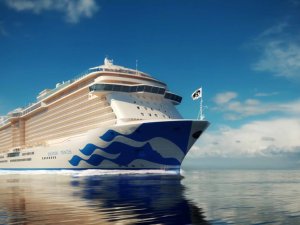 Princess Cruises revealed its sixth and final Royal-class ship will be called Discovery Princess. Following inaugural sailings starting in November 2021 to the Mediterranean, Caribbean and South America, Discovery Princess will be based at Los Angeles.

Designed from the ground up as a MedallionClass ship, the 143,700gt, 3,660-passenger Discovery Princess is under construction at Fincantieri’s Monfalcone yard. It is scheduled to debut on Nov. 3, 2021, on a seven-day Mediterranean and Aegean inaugural cruise from Civitavecchia (Rome) to Athens.

Discovery Princess will sail on destination-rich itineraries to the Mediterranean, Caribbean and South America before arriving in Los Angeles for its West Coast debut in March 2022. Cruises will visit Mexico and the California coast.

Eight itinerary options in the Mediterranean range from seven to 21 days with departures from Civitavecchia, Athens or Barcelona.

Starting in early December, Discovery Princess will operate six Caribbean voyages of four, eight and 16 days. Tortola is a new port in the Eastern Caribbean for Princess, while Southern Caribbean sailings will call at all three ABC islands. Departures are Dec. 9, 13, 21 and 29,.

Mexico and the California coast

Discovery Princess makes its Los Angeles debut on March 1, 2022 with a five-day cruise overnighting at Cabo San Lucas, followed by a weeklong Mexican Riveria cruise. A seven-day ‘Classic California Coast’ cruise follows with ‘More Ashore’ in San Francisco and San Diego. Departure dates are March 1, 6 and 13, April 3 and 10, and May 1, 2022.

Past passengers are eligible for a special promotion when booking early. A reduced deposit of 10% is available through Feb. 29, 2020. In addition, those booking the 50-day South America voyage will receive on-board credit and complimentary gratuities and Wi-Fi. BC Ferries Christens New Hybrid-Electric Ship DuoCanadian ferry operator BC Ferries has unveiled the names of its first two Island class ferries at a naming ceremony at Point Hope Maritime in Victoria.