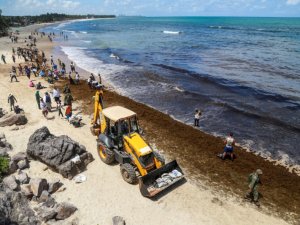 By Jake Spring and Marta Nogueira BRASILIA/RIO DE JANEIRO, Oct 24 (Reuters) – A thick sludge of crude oil has been washing up on vast stretches of Brazil’s coast for nearly two months, and authorities and experts have been baffled by its origin.

This is what is known about the environmental disaster and what remains a mystery.

Oil has washed up along thousands of kilometers of beaches, mangroves and reefs on the shores of nine states in northeastern Brazil. More than 100 beaches have been affected, including some of the country’s most famous.

The exact date oil began arriving ashore is unclear, but the government launched its response on Sept. 2 and the spill captured broader public attention in the following weeks.

As of Oct. 21, Brazil has collected 600 tonnes of the sludge in cleanup efforts, while working to rehabilitate birds and sea turtles coated in the thick crude.

HOW IS IT UNUSUAL?

The oil has not arrived in large slicks floating on the surface, as seen in historic spills like the Exxon Valdez oil tanker in 1989 or the 2010 explosion of the Deepwater Horizon oil drilling platform in the Gulf of Mexico.

Instead, the oil is an especially heavy crude so dense that it often floats below the surface of the water, making it far more difficult to find the source or gauge the full scale.

The oil is surfacing as it washes ashore sporadically, meaning one beach may see large amounts of crude while another next door will be completely unaffected.

WHAT HAS THE GOVERNMENT DONE?

Federal environmental agency Ibama, state governments and the navy have been involved in cleanup efforts.

Ibama has said that because the oil does not float, conventional methods are ineffective, such as barriers to keep the oil from reaching shore. Instead, efforts have been focused on collecting the oil as it washes ashore.

The navy is leading an investigation into the source of the oil, with support from other agencies and state-run oil firm Petroleo Brasileiro SA, or Petrobras. Federal police are also investigating possible criminal activity associated with the spill.

WHAT IS THE SOURCE?

Where the oil is coming from remains a mystery, with the government and experts suggesting various theories.

Early on, some thought the oil could be residue from washing a ship’s tank at sea. But the government now considers that unlikely based on the amount of oil, a source familiar with the matter told Reuters.

Others have speculated it could be a shipwreck, possibly an old ship on the seabed that has corroded to the point that its oil tank leaked.

A prominent theory is that the oil is the result of a “ship-to-ship” transfer that went wrong. In such transfers, oil is piped between ships at sea with a hose and other equipment.

If a hose ruptured at night during a transfer and no one noticed, it could take about 20-30 minutes to pump 600 tonnes of oil into the ocean – the amount collected thus far – depending on the transfer rate, estimates Alexandros Glykas, managing director of ship-to-ship risk management consultancy DYNAMARINe.

Still, Glykas said it is difficult to prove it was ship-to-ship without physical evidence such as used equipment in the ocean or relevant records from ship-to-ship service providers.

WHAT DOES THE OIL SHOW?

The best evidence at hand is from lab tests of oil samples.

An initial report by Petrobras indicated the samples shared the same properties as Venezuelan oil. Brazil’s navy has also conducted an analysis that confirmed the oil was Venezuelan.

But Brazil government officials say that does not mean the country of Venezuela is responsible. Venezuela’s government and state oil firm PDVSA have denied any involvement in the spill.

Reuters cannot verify the findings as neither report has been made public. Two people familiar with the matter said the documents had been marked as state secrets, although it was unclear for what reason.

The Federal University of Bahia, located in one of the states effected by the spill, conducted its own study concluding that the oil was Venezuelan, said Olivia Oliveira, a researcher involved in the study.

The density and sulfur content of the oil, which could aid in identifying its source, are harder to confirm because of the breakdown of the oil as it sits in the seawater for months.

Oliveira declined to provide a copy of the university’s report, saying it had been provided to police and federal prosecutors and remained part of an ongoing investigation. (Reporting by Jake Spring in Brasilia and Marta Nogueira in Rio de Janeiro Editing by Brad Haynes and David Gregorio)

This news is a total 624 time has been read
Tags: brazil, brazil oil spill