A ship a year for British shipyards 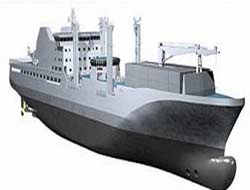 A ship a year for British shipyards

The Times today carries a report claiming that an agreement has been reached between the government BAE Systems and VT as part of the trading for a new national shipbuilding champion.

Now that BAE and VT have announced their setting up of a joint venture to merge their operations in Glasgow and Portsmouth, as part of the deal they will be guaranteed 'a ship a year' from the government to keep vital skills in their shipyards. The deal will last for fifteen years.

Should no ship be ordered in any year, the expenses of maintaining core skills will be paid to the new shipbuilding company says the Times.

The government has long expressed its wish for a consolidation of shipbuilding capacity whilst the companies have expressed dismay at previous feast and famine situations where after a crop of orders ends they have to let vital staff go and cannot plan for future investment such as in training.

Now this new deal could spell the end of uncertainty, but it will come at a price. The shipbuilders will be expected to make cost savings and further efficiencies.

Possible future contracts could include ships to replace ageing Royal Fleet Auxiliary vessels. (Military Afloat Reach and Sustainability - MARS Project) Currently the UK is embarked on a programme to renew the Royal Navy, with the building of the Type 45 destroyers and the recently announced aircraft carriers and is also seeking to replace ageing and near obsolete vessels in the RFA..

The renewal of the RFA fleet is at assessment stage with orders expected to be awarded next year. It had been feared, given the hints contained in some statements from government departments, that work on these vessels could go abroad. Although in March of this year in parliament the Secretary of State for Defence confirmed that the vessels would be classed as military ships, meaning that EU procurement laws would not be applicable, he did not confirm the vessels would be built in the UK.

If the Times report is accurate then it would be safe to assume British shipyards will be in pole position for the RFA newbuilds.

This news is a total 701 time has been read