A strategic base from Arkas 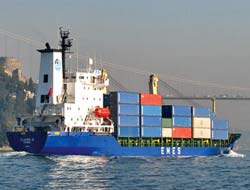 Arkas Russia has begun operations in Novorossiysk, which will serve as a strategic base of operations for shipping and other transportation services in Russia.

A strategic transportation base from Arkas to Russia

Arkas Russia has begun operations in Novorossiysk, which will serve as a strategic base of operations for shipping and other transportation services in Russia.

In order to effectively handle the increasing trade volume with Russia, one of Turkey"s most important trade partners, Arkas Russia has begun operations at the port of Novorossiysk. Import containers reaching Novorossiyk port by sea are transferred to their final destinations in Russia and all of the countries in the Commonwealth of Independent States via rail and overland connections.

Arkas Russia offers door-to-door delivery and reliable transport of imported goods to numerous ports in the Black Sea and Mediterranean via EMES lines.

Located in southern Russia, the port of Novorossiysk is a Deep Water port that is ice free year-round. Exports from here are sent primarily to ports in Istanbul, Alexandria, Algiers, Barcelona and Valencia, while imports are received from Turkey, Spain and Greece. Imported goods include construction materials, deep freezers, non-hazardous chemicals, textile products, plastic household goods, PVC and marble. The most notable exports are plastic raw materials (polypropylene), paper and paper products, synthetic rubber, aluminum and similar metals as well as asbestos.

One of the most significant advantages of this port located only 450 nautical miles from Istanbul is rapid transit times. Shipments reach the port of Novorossiysk from Gemlik in 1.5 days, from Marport-Istanbul in 2 and from Izmir in 3.5 days. Shipments to Russia, the world's largest country in terms of land area and to the surrounding Turkish Republics via the port of Novorossiysk is considered the most intelligent way to reach these markets.

Arkas Russia also offers a railway platform to countries in Central Asia, such as Kazakhstan, Turkmenistan, Uzbekistan and Kirghizstan.

Arkas Russia not only provides maritime transport but also offers storage, truck delivery and transit containers procedures, making Arkas Russia a strategic rendezvous point for every type of transportation due to its location in Novorossiysk, Russia's door to the Black Sea.

This news is a total 1543 time has been read