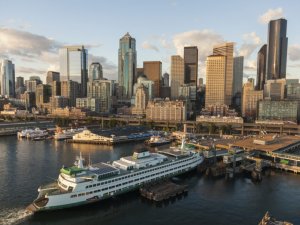 The U.S. Coast Guard is becoming increasingly concerned about bicycles being left behind on Washington States Ferries amid the exploding popularity of bike-share programs.

In one incident last week, a ride-share bike left behind on a Washington State Ferry resulted in a helicopter search before authorities determined that no person had fallen overboard. The search ended up costing more $17,000 and used up resources and assets that could have been required in a real emergency.

When a passenger leaves their bicycle on a ferry, it’s the duty of Coast Guard and ferry personnel to treat it as a potential distress situation until the bicyclist can be confirmed safe. Sometimes it can take several hours to verify that no one is in danger, and the resulting search can end up wasting tax-payer dollars and impact the response to an actual emergency situation.

According to the Coast Guard, there have been 12 cases of bicycles left aboard ferries in the last 18 months, three of which were ride-share bikes. The incidents have now prompted the U.S. Coast Guard 13th District to issue a statement about its growing concern over abandoned bicycles left on ferries.

“The Washington State Ferry system is a valuable local resource that provides a great benefit to the area by facilitating transportation and reducing commuter congestion,” said Capt. Linda Sturgis, commander, Sector Puget Sound. “However, when bicycles are left behind on a ferry, the Coast Guard assumes the worst and searches in the event the bicycle operator may have fallen overboard. We join the Washington State Ferry system in requesting that bike-share users not bring rented bicycles on board the ferries, instead of leaving the bicycle at the pier and boarding as a walk-on passenger. For all passengers, we request you leave with the bikes you bring onboard.”

Rideshare bike programs have been around for a long time, but they have exploded in popularity in recent years with advances in GPS and mobile app technology. Some rideshare programs now even have dockless bikes, which allow riders to pick-up and drop-off where it is most convenient for them (such as next to an apartment building or, in this case, a ferry).

This news is a total 862 time has been read
Tags: Abandoned Ride-Share Bike on Washington State Ferry Prompts $17, 000 Search