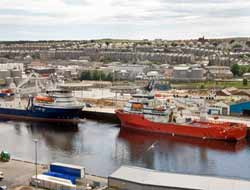 Exports of oilfield equipment from Aberdeen Harbour to numerous locations in West Africa increased by 45% in the first half of 2007, compared to the same period last year.

Oilfield equipment shipments almost doubled in first half of 2007.

Exports of oilfield equipment from Aberdeen Harbour to numerous locations in West Africa increased by 45% in the first half of 2007, compared to the same period last year. The port welcomed 33 cargo vessels in the first six months to load a wide variety of oil- and gas-related cargoes for various destinations there.

Aberdeen "s special status as a centre of excellence for the manufacture and servicing of oil and gas equipment has led to three scheduled West African services, handling increased tonnages at the port.

Factors influencing the shipping figures include fewer fishing vessels using the port and NorthLink"s two passenger/freight ferries being temporarily out of service for upgrades. More than 58,000 passengers sailed on the ferries.

White fish landings were down more than 50% at 1,676 tonnes, with tonnages of industrial fish and shellfish both showing small rises.

The successful introduction of the export of logs in 2006 has been followed through with a further seven shipments, adding up to 18,120 tonnes, in the first half of this year.

Aberdeen Harbour Board Chief Executive, Colin Parker, commented: ?The sustained high level of activity across most sectors, following the records set in recent years, reflects the considerable efforts of port users and the efficiency of harbour operations.

?A busy start to the second half of the year means that traffic is now ahead of the level at this point in 2006.?

The Harbour Board continue to develop additional facilities to accommodate activity, with another project ? a £2.5 million, 20,000 square metre back-up area at Point Law Peninsula ? due for completion in the autumn.

This news is a total 1022 time has been read