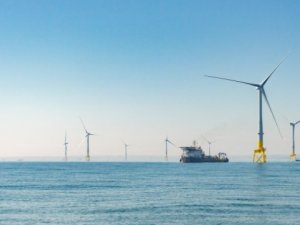 The Vestas turbines installed at the center are the largest in commercial operation, with two at 8.8 MW and nine at 8.4 MW. They are mounted on suction bucket jackets, a new alternative to the monopiles normally used in the offshore wind industry.

Suction buckets are a fast, low-impact way to place a wind tower on a sediment bottom, as they require no pile driving and can be emplaced in as little as three hours. Thanks to this method of affixing the turbine to the seafloor, the EOWDC farm was installed in just nine weeks. The EOWDC is the first offshore wind project to deploy this kind of foundation at commercial scale, and is the first to pair suction buckets with the world’s most powerful turbines.

The near-shore site makes a prominent and visible addition to the waterfront, and this element of its design led to years of protests from U.S. President Donald Trump, who owns a golf course to the northwest of the site. Before he was elected to the presidency, Trump launched an anti-wind farm publicity campaign and sued (unsuccessfully) to block the project.

“Donald Trump had three appeals and we are here today because those appeals were scuppered," said Jean Morrison of the Aberdeen Renewable Energy Group, an industry association for the renewable energy sector. “We all have felt this project should definitely go ahead, and it has.”

EOWDC benefited from $45 million in EU funding, but the ongoing debate over Britain's exit from the EU does not trouble Vattenfall, suggested CEO Magnus Hall. “Vattenfall is in Britain to grow," said Hall. "The success of our wind power investments over the past decade, and the ambition of Scottish and UK governments to transform the energy and transport sectors, give us confidence in our UK future."

This news is a total 411 time has been read
Tags: Aberdeen's Experimental Wind Farm Begins Operation