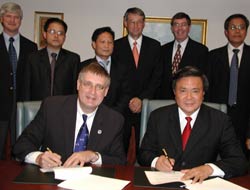 ABS, one of the world's leading international ship classification societies, has signed an expanded agreement of cooperation with Vietnam Register (VR) covering the provision of a wide range of classification and statutory certification services.

ABS, one of the world's leading international ship classification societies, has signed an expanded agreement of cooperation with Vietnam Register (VR) covering the provision of a wide range of classification and statutory certification services.

Christopher J Wiernicki, ABS President and Nguyen Van Ban, General Director of Vietnam Register signed the agreement at ABS’s Corporate Headquarters in Houston on Monday 14 May. The two societies had been operating under a more limited cooperative agreement, originally signed in 1994 and subsequently amended in 1999.

A key element of the new agreement is a program that will be instituted by ABS to train and qualify VR surveyors to ABS standards.

“ Vietnam’s shipping and shipbuilding industries are expanding rapidly with a specific focus on international contracts,” said Wiernicki. “The Vietnam Register has a great deal of experience with smaller, coastal ships and some offshore installations but the changing nature of the nation s shipping industry means they must now expand their horizons and capabilities. This agreement will allow ABS to assist them in meeting that challenge while, at the same time, giving us greater access to the expanding Vietnamese market.”

The agreement also recognizes the probability that there will be increased traffic into US ports by Vietnamese flag ships as a result of the recent granting of permanent non-discriminatory treatment status to Vietnamese products by the US Government, and Vietnam’s acceptance as a member of the World Trade Organization.

“For the Vietnamese shipowners who are expanding into the deep sea, international trades, particularly the trades to the US, the partnership with ABS gives them the security of a classification certificate from an established member of IACS and access to the global network of ABS surveyors while, at the same time, allowing them to support their own national classification society,” he added.

VR General Director Nguyen Van Ban stressed that “This agreement is the next step in the development of our Register and capabilities. We have been very impressed with the technical capabilities of ABS and also by their extensive training programs offered through the ABS Academy. We are looking forward to working closely with the survey and engineering staff of ABS as they expand their activities in Vietnam. We have much to learn but also much to offer and this new agreement will be of great mutual benefit to both societies.”

The rapidly growing Vietnam shipbuilding industry has set its sights on rising from its current position as the eighth largest shipbuilding nation to the number four position behind Korea, Japan and China. It experienced a 44 percent year on year growth in 2006. The current orderbook of the Vietnamese yards now numbers over 100 vessels of which around half are for foreign owners. It includes a series of 53,000 dwt bulkers, aframax tankers, a 150,000 dwt Floating Storage Offloading (FSO) vessel, container vessels of up to 1,730 TEU, and small LPG carriers. Current investments will create capacity to build 300,000 dwt VLCCs within the next two years. It is also developing a diesel engine manufacturing and assembly plant with a designed capacity of 300 units a year and capable of producing engines of 30,000hp.

Founded in 1862, ABS is a leading international classification society devoted to promoting the security of life, property and the marine environment through the development and verification of standards for the design, construction and operational maintenance of marine-related facilities.

Vietnam Register is a non-profit State Body that provides technical supervision and certification to Quality and Safety standards of most major transportation modes, including ships and offshore installations. It was established in 1964 and issued its first Rules and Regulations for Classification and Construction of Steel Sea-Going Ships in 1970. It is headquartered in Hanoi and maintains 26 offices and sub-offices nationwide that provide ship and offshore classification and certification services.