Accident on board Greek ship kills two and injures thirteen 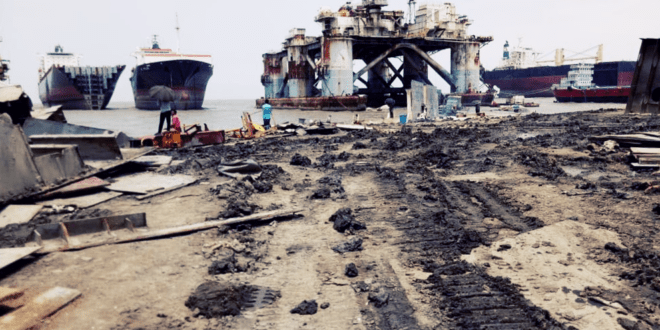 Two deaths and thirteen severe injuries. This is the toll of victims following yet another accident at the shipbreaking beach of Chattogram, Bangladesh. The accident occurred in the afternoon of Saturday 31 August at Ziri Subedar shipbreaking yard.

Two deaths and thirteen severe injuries. This is the toll of victims following yet another accident at the shipbreaking beach of Chattogram, Bangladesh. The accident occurred in the afternoon of Saturday 31 August at Ziri Subedar shipbreaking yard.

So far this year, fifteen shipbreaking workers have lost their lives in Chattogram. It is not the first time Ziri’s failure to ensure safe working conditions causes death. [2]

“It’s sad that our regulatory authorities had to wait for deaths of seven workers and grievous injuries of fifteen in a row of seven incidences in this yard alone since 2011. Had they acted earlier, we could have saved these invaluable lives. The negligent authorities should also be punished as their failures and seeming cohesion have led to these tragic events. I also wonder how long it will take for the West to act on these deaths and stop sending vessels to the unsafe yards of Bangladesh,” says Rizwana Hasan, Chief Executive of the Bangladesh Environmental Lawyers Association (BELA) and Platform’s board member.

The container ship CSL VIRGINIA was beached in Bangladesh in February 2019. According to shipping media, it was owned and managed by Andreas Hadjiyiannis’ Greek company Cyprus Sea Lines. The vessel was hit by a Tunisian ferry when it was anchored off Corsica in October 2018. The collision breached the CSL VIRGINIA’s fuel tanks causing a significant oil spill that affected especially the French Mediterranean coast and required a vast clean-up operation. Before setting sail for the Chattogram beach, the vessel was allowed to leave French territorial waters, escorted by the French coast guard, upon claims that it would be repaired in Constanta, Romania. Instead, it spent a few weeks in a Turkish shipyard – there it was renamed VIRGIN STAR and changed registry from the flag of Cyprus to the flag of Liberia. It passed the Suez Canal on 25 December 2018, just days before the entry-into-force of the EU Ship Recycling Regulation.

[2] On 25 July 2013, Muhammed Selim was severely injured when a heavy iron piece hit and broke his back while working at the yard. The Platform informed the concerned authorities and arranged a meeting between Selim’s wife, accompanied by some of the victim’s fellow workers, and the yard’s management. However, Ziri’s owner did not assist Selim in receiving the necessary treatment for his serious injuries. Selim was brought to his native home in Noakhali, in the Chattogram district, and on 10 November 2014, he died from the injuries he suffered. It was only once the Platform informed Ziri that it would take the matter to the labour court that the yard agreed to pay compensation. Selim’s wife finally received 100.000 Taka (approx. 1000 EUR) on 15 March 2015.

This news is a total 1896 time has been read
Tags: ship CSL VIRGINIA, Aminul Islam, Tushar Chakma, Accident on board Greek