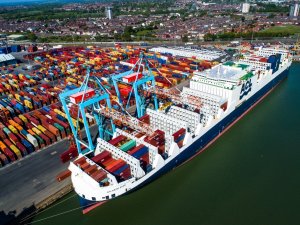 U.S.-based Atlantic Container Line (ACL) has arranged a 15-year contract extension with Peel Ports for container and roll-on/roll-off operations at the Port of Liverpool until 2035.

Peel Ports Group is making a significant investment at RSCT to accommodate ACL’s new fleet of G4 vessels, which are registered in the UK and fly the Red Ensign. The passage entrance into the Seaforth Basin has been widened by 28 meters to allow safe access for the large G4 vessels into the terminal.

In addition, Peel Ports is investing in two ship-to-shore (STS) cranes with increased height and reach, adding capacity to the dedicated vehicle storage area to handle ACL’s growing cargo requirements. The overall project expected to be completed during 2021.

ACL ships over 125,000 units of containers, cars and RoRo machinery per annum, and supports a supply chain with a critical link between the UK’s export and import trades.

“It gives me great pleasure to make this extended Agreement with the Mersey Docks and Harbour Company,” Gianluca Grimaldi, President of the Grimaldi Group commented.

“The Grimaldi Group applauds the major improvements to Royal Seaforth Terminal and recognises it as a renewed commitment of our strong relationship with the Port of Liverpool, Mersey Maritime, and the customers and suppliers who have been supportive of ACL’s operation for so many years.”

This news is a total 641 time has been read
Tags: ACL, Peel Ports, Port of Liverpool.