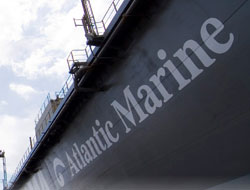 Atlantic Marine Holding Company, a J.F. Lehman portfolio company, has been on the acquisition trail. It has bought Boston Ship Acquisition, LLC, the parent of Boston Ship Repair and PennShip Services, which operates two large dry docks in Boston, Mass. and Philadelphia.

C. Alexander Harman, a Partner at J.F. Lehman and a Director of Atlantic Marine, called the Boston acquisition "a great fit with Atlantic Marine and an excellent investment opportunity for J.F. Lehman. The expanded geographic reach and dry-dock assets that this combination provides Atlantic Marine will greatly enhance our ability to serve our customers."

Mr. Harman described the Millennium acquisition as "an excellent investment opportunity for J.F. Lehman & Company and is a highly complementary fit with Atlantic Marine. We look forward to partnering with Millennium's management team to grow both businesses and to better serve our customers and the marine marketplace."

This news is a total 685 time has been read