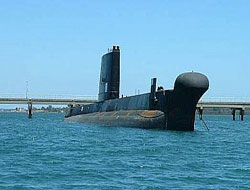 Scottish-built submarine is for sale on Ebay.

Scottish-built submarine is for sale on Ebay

She was built in Greenock, launched by Princess Anne on 3rd December, 1975 at the famous Scotts' Shipbuilding & Engineering yard and served with the Royal Australian Navy until 2000.

She was the last of the Oberon-class submarines to be built, and the last to be in service. Her arrival at Western Port Bay in 2002 saw celebrations as she was handed over to the Western Port Oberon Association.

The vision was to create a world-class exhibit centred on the boat in Hastings, but unfortunately the Association says they have encountered 'obstacles' along the way and have now offered the vessel up for sale on Ebay at a Classified Ad price of $4,900,000.

The listing of the boat is described as a 'back up'. The association president Max Bryant said:

"If the State Government doesn't want this project in Victoria, we need to advertise it throughout the world and find either a partner or another group that wants to take the project over. I don't think there's been too many submarines advertised on eBay before."

He said it was 'pure desperation' to put the boat on Ebay but that they felt they were 'getting nowhere'.

He said he did not want a buyer to turn her into 'a dive site or anything like that' but to preserve the vessel and her heritage.

Hmas Otama is 297 feet long and has a tonnage of 2186 tons. After six years lay up she is in a pretty poor state but nonetheless, she is a complete submarine with all of her original features intact. A piece of Australian naval, and Scottish shipbuilding, history.

This news is a total 770 time has been read