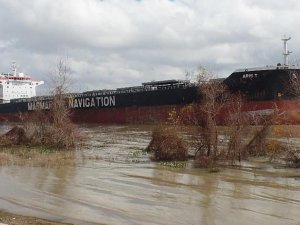 An investigation into a collision between a bulk carrier, a tug and a tank barge, which occurred in late January 2016 in the Lower Mississippi River, showed that the actions of the pilot aboard the bulker and the tug captain led to the incident, ​the Nati

In the evening hours of January 31, 2016, the bulk carrier Aris T collided with tank barge, towing vessel Pedernales, and two facility structures, all of which were located on the left descending bank of the Mississippi River at Norco, Louisiana.

Also damaged during the collision were one additional shoreside structure, another towing vessel, and two other tank barges, bringing the total damage cost to more than USD 60 million. No pollution resulted from the accident, however, two dock workers reported injuries.

Following an investigation, the NTSB determined that the probable cause of the collision was the failure of the pilot on the Aris T to take early and effective action to mitigate the risk presented by the developing upriver traffic situation, and the distraction of the captain on the Loretta G. Cenac from safety-critical navigational functions as a result of his cell phone use.

Based on information from the involved parties, investigators concluded that the navigational equipment, steering, propulsion, and other vital systems on the Aris T, Elizabeth M. Robinson, and Loretta G. Cenac operated satisfactorily at the time of the accident.

This news is a total 770 time has been read
Tags: Actions of Pilot, Tug Captain Led to Collision