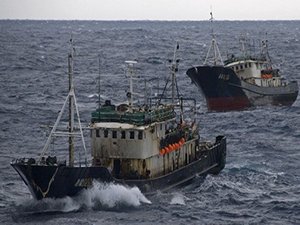 They are calling for international intervention. According to an analysis prepared by Oceana, nearly 300 Chinese vessels are “pillaging the waters off the Galapagos Marine Reserve primarily for squid.”

The ocean conversation group Oceana is again raising concerns about the Chinese fishing vessel fleet spotted in the waters near the Galapagos Islands. The activist group is reiterating concerns of overfishing and potential activities by the Chinese fleet to disguise their actions.

They are calling for international intervention. According to an analysis prepared by Oceana, nearly 300 Chinese vessels are “pillaging the waters off the Galapagos Marine Reserve primarily for squid.”

They say that the squid the Chinese are fishing is essential to the diet of iconic Galapagos species such as fur seals and hammerhead sharks.

The analysis also says that the squid is also part of the food chain for many commercial and recreational fish species, including tuna and billfish that contribute to the local economy.

“For a month, the world watched and wondered what China’s enormous fishing fleet was doing off the Galapagos Islands,” said Dr. Marla Valentine, Oceana’s illegal fishing and transparency analyst.

“This massive and ongoing fishing effort of China’s fleet threatens the Galapagos Islands, the rare species that only call it home and everyone that depends on it for food and livelihoods. Sadly, this is just the tip of the iceberg when it comes to the impact of China’s huge distant-water fishing fleet on our oceans.

The situation playing out in the Galapagos should raise serious questions and concerns about the impact China’s massive fishing fleet is having on the oceans it sails.”

Using the mapping tool Global Fishing Watch, an independent nonprofit founded by Oceana in partnership with Google and SkyTruth, Oceana says it analyzed data from fishing vessels found near the Galapagos Islands from July 13 to August 13, 2020.

During this one month period, Oceana believes the Chinese fleet, which was primarily fishing for squid, logged more than 73,000 total hours of apparent fishing.

Further, they contend that nearly all of the visible fishing activity off the Galapagos Islands during this one-month period was by Chinese-flagged vessels.

“The governments of the world must work together to ensure that all seafood is safe, legally caught, responsibly sourced and honestly labeled to protect the oceans and the people who depend upon them,” said Beth Lowell, Oceana’s deputy vice president for U.S. campaigns.

Oceana says that it believes the actions of the Chinese fleet operating off the Galapagos Islands run counter to fishing rules implemented by China in recent months to allegedly improve fishing industry sustainability and ocean protection measures.

Contributing to their concern is their belief that China has the world’s largest fishing fleet and accounts for 40% of the global fishing effort.

This news is a total 1889 time has been read
Tags: Activist Group Analyzes Chinese Fishing off Galapagos