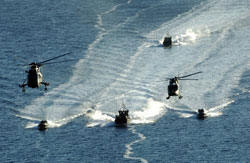 Shipowners operating in the region now face a host of difficult financial choices.

As a result of the piracy crisis off Africa, shipowners are likely to face additional insurance costs equivalent to $400m a year.

Shipowners struggling with plunging freight rates and vessel values could face additional insurance costs equivalent to $400m a year as a result of the piracy crisis off Africa. Security consultants BGN Risk today said there was every indication that this estimate would grow.

The news came as industry giant AP Moller-Maersk confirmed it would re-route vulnerable vessels around the Cape of Good Hope and the UN Security Council today unanimously agreed a British plan to impose new sanctions against Somalia, including a call for the freezing of the financial assets of certain entities and individuals.

BGN Risk based its figures on research conducted in the insurance markets a fortnight ago. BGN Risk partner Liam Morrissey told: ?We talked to a range of insurers and brokers, and the impression is that this figure is set to rise and rise.?

London brokers and underwriters contacted by BGN gave a range of premium levels that translated into an average of around $20,000 per vessel per transit of the Gulf of the Aden.

Mr Morrissey said that, with some 20,000 transits in the region per year, the $400m figure was indicative of the scale of extra insurance facing shipowners.

Brokers are indicating a range of hull premium levels in a highly competitive market, with BGN basing its calculations on 0.05%-0.07% of hull value.

Last month, marine insurance brokers told Lloyd"s List that war policies not ammended to inclue risk of piracy were in the region of 0.025%.

Other brokers contacted today gave a range of 0.03%-0.04% for war risks not including piracy to 0.065% for a transit with piracy cover.

BGN Risk added that its figures did not include the mounting cost of ransoms, with some £30m paid out so far this year.

Companies need to ensure to have the proper additional insurance cover

Mr Morrissey said: ?Companies wishing to safeguard their cargo should ensure they have the appropriate additional insurance cover.

However, he added that shipping companies that are already squeezed by high fuel costs and stiff competition are failing to take out adequate special risk insurance.

?This leaves their vessels, crew and cargo exposed in the very real event of an attack or hijacking attempt,? he adeed.

This news is a total 682 time has been read