Adoption of LNG as fuel 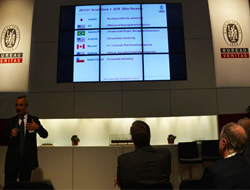 An immediate demand for LNG as fuel for container shipping in eco-zones, such as North Europe or the United States, can be expected in the near future.
Donche-Gay said that adoption of LNG as fuel will be a progressive transition, adding that “notably, for containers ensuring transportation within those zones we can expect containerships of 1000 TEU or smaller to immediately shift to LNG as fuel and be fully compliant with NOx and SOx regulations.”
According to him, in this way the market is being created for bigger ships.
Adoption of LNG as Fuel Progressive Transition1Bureau Veritas has been engaged in projects related to adoption of LNG as fuel for some time now, including classification of LNG powered vessels. The most recent include Becker Marine’s LNG Hybrid power barge, which will be deployed to Hamburg and start operation in October 2014.
In the cruise season the barge will deliver power to the AIDA fleet. In wintertime shore-based clients will receive electric power and thermal energy.
Donche-Gay also said that Bureau Veritas carried out the risk analysis and HAZID studies for the project.
Bureau Veritas has been chosen to class the unique LNG bunkering vessel which will be built at Hanjin Heavy Industries, Korea, under an agreement between Japan’s NYK and Mitsubishi and France’s GDF-Suez.
The vessel will carry 5,000 cum of LNG for ships’ fuel stored at 4 Bar in two IMO Type C pressure tanks. Delivery is set for 2016 when the vessel will operate from the Fluxys LNG Terminal in Zeebrugge, initially supplying LNG fuel from GDF-SUEZ to the fleet of United European Car Carriers.
Donche-Gay said, “Our experience with every type and size of gas carrier, our lead in the area of dual-fuel and multi-function gas carriers and our ability to support the partners means we can make a real contribution to this initiative. It will help kick-start LNG bunkering, bringing forward the use of this clean fuel in North European waters.”
http://turkishmaritime.com.tr
This news is a total 5306 time has been read