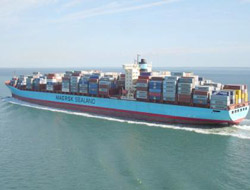 ADRIAN MAERSK will be followed by sister vessel, ARTHUR MAERSK.

ADRIAN MAERSK will be followed by sister vessel, ARTHUR MAERSK.

Thamesport (London) Limited has welcomed the largest vessel ever handled at the Port. The 352m Adrian Maersk operates on Maersk"s AE1 Far East service. This latest call by the world"s largest container Line at Thamesport will be followed, on Sunday 2nd September, by the Arthur Maersk, sister ship of the Adrian Maersk. Both vessels have been diverted from their normal slots at Southampton Container Terminals (SCT).

The calls follow successful visits to the Medway Port by the Sovereign Maersk, and the Chastine Maersk, in recent weeks. The vessels, which operate on the AE8 and AE1 services respectively, were also diverted from Southampton.

?Thamesport is the only deep water container terminal in the UK currently able to accommodate a significant increase in container volumes. The successful handling of these calls has proved that it is an excellent choice for shippers, with excellent turnaround times, and no congestion?.

?We have established an excellent relationship with Maersk Line throughout the many years of working together, and are more than happy to accommodate their vessels at Thamesport?.

Thamesport is currently operating at just sixty-five percent of its available capacity. Vehicle turn times average less than 45 minutes, with 7-9 minutes in the Empty Park at the port.

The 6,750-TEU Bangkok Express was also handled at Thamesport earlier in the year, and had been similarly diverted from SCT. It was the first Grand Alliance vessel to be handled at the Medway port in eleven months.

This news is a total 826 time has been read