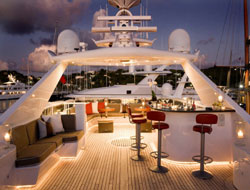 Turkish yacht manufacturers make use of the global crisis.

While big yacht manufacturing companies of Europe are being shut down one after another, Turkish yacht manufacturers received at Monaco Yacht Show deluxe yacht order of ? 1.2 billion for the next 5 years.

Antalya Free Zone Investors" Association (ASDER) Vice President expressed that in Italy, France and Germany, where the biggest yacht shipyards of Europe are located in, yacht shipyards are closed or about to be closed one after another. Having said that the companies belonging to Antalya Free Zone Investors" Association attended Monaco Yacht Show, one of world"s biggest yacht shows, Çelikkol told that one yacht manufactured in a shipyard in Antalya won a significant reward.

?Yacht manufacturers in Antalya utilize the economic crisis. Not only did they win the reward ?Best Yacht? but also came back to Turkey with million dollar orders. We received orders of ?1.2 billion for the next 5 years. There is an order market reaching an annual return of ?100 million in 2009, ?200 million in 2010 and ?300 million in 2011. Construction time of a yacht is 3 years. Big European yacht companies have begun to steer their orders to Antalya shipyards. European yacht manufacturers have started to lay off due to economic crisis. Those who discern the quality of Turkish yachts refrain from ordering European companies. Investors abstain from the possibility that they will not be able to take delivery of their orders placed in Europe on time. Therefore Turkish yachts are in demand and are no longer sold cheap. The price of Turkish yachts is equal to the price of Italian yachts. The investors have credibility in Antalya because no yacht company in Antalya has been affected by current crisis so far. For the reason that nothing is clear about future Italian employee status and bank interests, yacht merchandisers are anxious about Italy and Germany. Antalya presents a much better stability then the ones in Europe for the time being."

Çelikkol pointed out that in 5 years, Turkey can be world leader in yacht sector, if there is no bureaucratic obstacle.