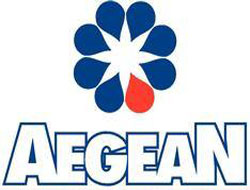 Aegean Marine Petroleum Network is in a position to expand as its rivals founder.

Aegean Marine Petroleum Network is in a position to expand as its rivals founder.

Aegean Marine Petroleum Network is in a position to expand as its rivals founder. The company delivers oil to ships at sea, a specialized business that will always benefit from some level of demand as long as vessels sail the world's trade routes. On Tuesday, it won an exclusive deal to provide bunkering services for a new port in Tangiers, and its shares rose 1.7%, or 30 cents, to $18.05. That's more than double the low of $7.62 touched late last year, though still well below the $44 high it touched in the spring.

The marine fuel logistics company is benefiting from tumbling bunker fuel prices as well as capacity cuts in the industry. Stephens analyst Kevin Sterling said Aegean Marine Petroleum Network is ?immune? to the global slowdown because although demand is decelerating, it"s still growing. ?Aegean could care less if a ship owner is earning $10,000 a day or $100,000 a day as long as that ship is moving on the water that ship is in need of fuel,? Sterling said. ?We"ve seen demand slow and freight rates fall off a cliff, but at the end of the day ships are still moving.?

Meanwhile, bunkering vessel capacity has been more than cut in half as the industry phases out single-hull vessels in favor of the double-hull variety, which are less likely to cause oil spills. Bunkering vessels are like floating gas stations that deliver fuel to ships. As the phaseout has progressed, Aegean has taken advantage of the opportunity to expand its own fleet.

Aegean President E. Nikolas Tavlarios told Forbes.com that he expects the competitive landscape to open up in 2009, which will allow the company to take market share and acquire smaller rivals. ?I think Aegean will be an active participant in the consolidation of this industry,? said Tavlarios. Although Aegean is looking for acquisitions that will serve its existing client base, Tavlarios added that he ?wouldn"t do an acquisition in a market we"re already in,? signaling the company is looking for new opportunities.

Sterling said Aegean also has the benefit of long-term contracts with suppliers of bunker fuel like Exxon Mobil and BP as well as bunkering tankers to transport fuel from suppliers to customers. ?Few companies will likely have the ability or opportunity to grow earnings in 2009, much less double their earnings growth like we believe Aegean will,? said Sterling.

While other companies, especially in the shipping industry, saw falling sales in the fourth quarter, Tavlarios said Aegean"s revenues were stronger.

Meanwhile, as oil has tumbled from its highs of $147.0 per barrel in July, to $48.76 on Tuesday, bunker fuel, which is oil used aboard ships, has plunged from $700 a metric ton in July, to around $200. Falling oil prices are good news for the company because they should bolster demand.

As Aegean takes delivery of 13 vessels this year--and six next year--Sterling said its capital expenditures will decline, boosting the company's liquidity.

What"s bad for the rest of its industry is apt to be good for Aegean. While Aegean has more than doubled its bunkering fleet since going public in 2006, the credit crunch has hurt its rivals, keeping smaller operators from obtaining credit to purchase vessels or purchase marine fuel to resell. Sterling said this will create opportunities for Aegean to do some bottom-feeding- gobbling up ailing mom and pop operators.

This news is a total 811 time has been read