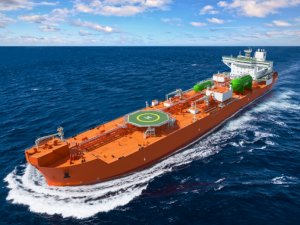 Tanker owner and operator AET has unveiled its newest vessel duo as it named what it said were two of the world’s first LNG dual-fuel dynamic positioning shuttle tankers (DPSTs).

According to AET, the ships will emit 40-48% less carbon than equivalent vessels built in 2008, meeting the International Maritime Organization’s (IMO) target of reducing carbon (CO2) emissions by 40% against 2008 baselines by 2030.

Powered using liquified natural gas (LNG) as primary fuel, the LNG DPSTs will also be able to capture 100% of the harmful volatile organic compounds which escape into the air from crude oil cargoes during loading and voyage for reuse as a supplementary fuel.

The vessels have been constructed by Samsung Heavy Industries (SHI), for AET Sea Shuttle AS (AETSS), a joint venture between Norwegian shipping company ADS Shipping and AET Tankers headquartered in Singapore, as the owner and commercial operator of the vessels.