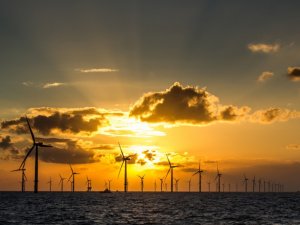 In shallow waters off the Dutch coast, you’ll soon see why the world’s biggest carbon market is struggling with slumping prices.

Dong Energy A/S plans to build two offshore wind parks there supplying as many as one million homes. The cost of the projects is about 60 percent cheaper than average rates estimated only a year ago by Bloomberg New Energy Finance in London. If they stick, the tariffs could be a “game changer” because they are showing lawmakers fighting climate change just how quickly energy economics are changing and the range of options they now have beyond the emissions market, according to Barclays Plc.

“We’ve reached a tipping point — the economics of clean energy have arrived,” Mark Lewis, a Barclays analyst in Paris who’s tracked the market since its 2005 inception, said by phone. “Policy makers are now pushing at an open door because the technology is making it so much easier.”

Falling costs for wind and solar eat at the core of the 45 billion-euro ($51 billion) trading system because they expose how competitive auctions and subsidized tariffs for renewable energy are effectively taking over as the main financial incentive for a shift away from fossil fuels. The market has been in the doldrums for years, and the U.K.’s decision to exit the European Union has robbed it of one of its biggest supporters, forcing prices even lower after an 80 percent slide since 2011.

Since the first offshore wind turbine was installed in Denmark in 1991, the technology has become increasingly popular with utilities and politicians because it doesn’t upset voters who object to turbines being built near their homes. Dong’s projects will supply households and factories for 15 years from 2020.

While Vattenfall AB will build a smaller project in the Danish North Sea that’s even cheaper than Dong’s, some facilities will still cost more.

The Dutch plants have lower expenses than average because the government covered some of the initial expenses, they’re in shallow water close to the shore and don’t need to pay for electricity transmission, said Tom Harries, an offshore wind analyst in London at BNEF.

Dong estimates that the average size of an offshore wind farm has more than doubled in the past five years to about 600 megawatts, or about half the size of a nuclear reactor. The cost for the Dutch projects over their lifetime, known as a levelized rate, is about 59 euros ($66) per megawatt-hour, according to BNEF. They are located about 22 kilometers (14 miles) off the coast.

Vattenfall’s Danish project will cost about 45 euros a megawatt-hour on the same basis, according to BNEF. That compares with a global average estimate in August last year of about 157 euros for offshore plants.

In the U.K., wind-power developers take on more project risks and expect higher returns because they must secure a suitable site, seek a permit and then win a subsidy in competition against rival plants, Harries said. In Denmark and the Netherlands, the governments took more control, choosing the location and undertaking surveys to ensure it was suitable, cutting risks for investors, he said. Germany is adopting the Danish-Dutch system.

The reductions demonstrate to policy makers around the world that offshore wind can be cheap, as the industry gets started in countries including the U.S. and Japan, Martin Neubert, Dong’s chief strategy officer for wind power, said Tuesday by phone.

“We clearly see there will be additional cost reductions because of the increase in scale,” he said.

Many investors in offshore wind prefer energy policies that provide certain returns, such as the feed-in tariffs Dong is getting, to those that may include carbon markets where there’s still a commodity-price risk, Neubert said.

And there’s plenty of risk in carbon allowances. After the June 23 Brexit vote, permits plunged for five days to a two-year low on ICE Futures Europe in London. They rose 5.3 percent to 4.36 euros a metric ton on Friday after trading as high as 31 euros in 2006.

The European Commission in Brussels declined to comment on how the carbon market will adjust to declining renewable energy costs.

A repeated failure to settle above 5 euros after the Brexit vote has deterred traders from betting on higher prices, said Bernadett Papp, an analyst at Vertis Environmental Finance Ltd. in Budapest. Open interest, a measure of positions that traders haven’t yet closed, was 11 percent lower on Wednesday compared with a year earlier, according to ICE data compiled by Bloomberg.

If nations would later this decade decide to support stricter emissions cuts, carbon could jump to about 45 euros a ton after 2020, according to Barclays’ Lewis.

But under current levels of ambition, sliding technology costs coupled with a glut means allowances may not rise much from current prices through 2030, he said. Countries may order the closure of coal and gas plants instead of relying on the carbon market to reduce emissions, he said.

“Renewable energy providers are engaged in a race for the bottom,” said Laurent Segalen, a managing partner at Megawatt-X Ltd. in London, which advises companies on wind and solar financing. “Costs are falling so fast, there may soon be no problem for the carbon market to fix.”

This news is a total 30684 time has been read
Tags: After Brexit Blow, Wind Parks at Sea Undermine Carbon Prices

Urgent Reforms Needed to Address Shipment of Dangerous GoodsPoorly stowed, undeclared or misdeclared dangerous cargos are causing an increasing number of containership incidents according to a new white paper released by the National Cargo Bureau.

Barge Crew at Golden Ray Site Tests Positive for COVID-19Miller said that work is proceeding at the site with the added precautions. The St. Simons Sound Response had previously reported that more than 400 people and 70 vessels were involved with the salvage operation.

Soaring costs discouraging crew changes in IndiaSoaring crew change costs in India are discouraging shipowners and managers from carrying out this task as seafarers pile up pressure to be relieved after spending time at sea much beyond their contract period.