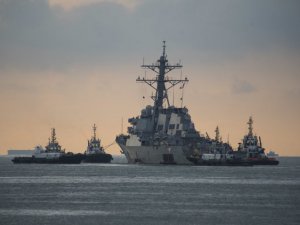 After a pair of crashes involving U.S. Navy ships in the Asia-Pacific killed more than a dozen people last year, the Navy’s efforts to develop its leaders is receiving renewed attention.

Last week, the Navy inaugurated the College of Leadership and Ethics at the U.S. Naval War College in Rhode Island.

Seventeen sailors were killed last year in two collisions with commercial vessels involving guided-missile destroyers, the Fitzgerald in June off Japan and the John S. McCain in August as it approached Singapore.

The commanding officers of the Navy destroyers involved in the collisions face courts-martial and military criminal charges. Charges against them include dereliction of duty, hazarding a vessel and negligent homicide.

A series of Navy investigations found rising pressure to meet demands for more and more Navy operations, particularly in the Pacific Ocean, led those in command to rationalize declining standards that ranged from basic seamanship to operational safety.

Some observers, including lawmakers during a congressional hearing, have been critical of the Navy’s handling of the incidents.

Navy officials acknowledge that the inauguration of the new college alone will not be enough and a change in culture will take time.

Chief of U.S. Naval Operations Admiral John Richardson said the incidents in the Pacific reinforced the need for a closer look at leadership training, something officials say was in the works prior to the crashes.

“As we’ve come through the collisions, the investigations focused on the accountability and in some cases discipline; it has just become clear that you can’t emphasize and focus on it too much,” Richardson told a small group of reporters.

Rear Admiral Jeff Harley, president of the Naval War College, said that in a break from the past, the new college would teach leadership courses throughout the year.

“One (issue) that has perhaps not been given the attention that is required, (and) we’re starting to understand that its required on a more continuous basis, is this idea of character competency,” – or leadership development, Harley said.

Another reason for increased focus on leadership is the expectation that the Navy will play a larger role in operations in the years ahead.

The U.S. military has put countering China and Russia at the center of a new strategy unveiled earlier this year.

This news is a total 1138 time has been read
Tags: After Deadly Collisions, U.S. Navy Refocuses on Leadership