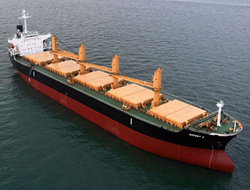 The Baltic Dry Index has halted its tremendous fall as of last week, which ended with a mild 10% drop, which also saw a couple of upward sessions.

The Baltic Dry Index has halted its tremendous fall as of last week, which ended with a mild 10% drop, which also saw a couple of upward sessions.

Nevertheless, no actual rebound can be seen in the dry bulk market at least for the following couple of weeks, with demand for cargoes remaining slim. Yesterday, the BDI lost nine points ending down to 820 points. The capesize index in particular kept on falling and is now at 1,095 points, which ? at this rate ? could see the index sinking at below 1,000 points levels for the first time in years. In effect, this means that most of the ships are barely earning enough to cover their operating costs, with many vessels losing money.

Dahlman Rose"s daily report said that ?potential support to the steel market resulting from infrastructure spending initiatives in China could bring relief to the dry bulk market, with rates at depressed levels across all vessel classes, particularly if steel production cuts are lifted.

Currently, however, margins at the steel mill level remain unfavorable and reports that Rio Tinto will cut Pilbara iron ore production by approximately 10% reflects sluggish demand over the past several months. It"s evident that a rebound in the steel sector should bring back the smile in dry bulk ship owners" lips. But, for the time being, the outlook of the steel industry remains grim.

Commenting on the short-term status of the dry bulk market, Barry Rogliano Salles said that ?although Vale formally withdrew its demands for a price increase, there was no fresh influx of Brazilian cargos onto the market, with some Chinese mills indicating they would continue to source ore from Australia and India as long as Brazilian stocks lasted (at least 18m tonnes).

Production cuts by both ore and steel producers have already disrupted the 2009 ore price talks, and Corus, Vale, Rio Tinto and Fortescue were among the companies announcing revised programmes.

However markets took some comfort from the $586bn stimulus package unveiled by China on Sunday, which should boost the country"s ailing construction industry?.

It also said that efforts to prop up demand, coupled with a rising number of newbuilding cancellations, could provide a glimmer of hope for owners in the
weeks ahead.

SSY released its latest dry bulk indexes, where no surprises were hidden. According to SSY, the Pacific Capesize Index is down by 502 points from a week ago to stand at 3,046 points. Capesize demand is under considerable pressure as major iron ore miners implement production cuts. Transpacific round voyage time charter earnings for 172k dwt vessels stand at $3,450/day. Backhaul time charter earnings collapsed
to their lowest level of $3,750/day, some 98% below the alltime highs set in June this year.

Similarly, the Atlantic Index continued to fall over the past week, falling 428 points from a week ago to at 3,310 points. Transatlantic round voyage earnings for 172k dwt vessels slumped to their lowest level of $4,000/day. Fronthaul time charter earnings were down by $27,500/day from four weeks ago to $10,000/day.

This news is a total 875 time has been read