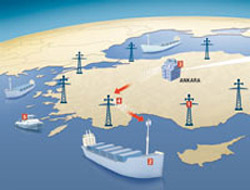 Automatic Identification System (AIS), which has been set with the associational work of Undersecretary of Turkish Maritime and its Australian partner AMS, is being activated in Turkish territorial waters.

Automatic Identification System (AIS), which has been set with the associational work of Undersecretary of Turkish Maritime and its Australian partner AMS, is being activated in Turkish territorial waters.

Transportation Minister ?smet Y?lmaz who joined to the start of the system, said: "This flag and this country not only belongs to Erdo?an and Binali Y?ld?r?m, but also all of us. The tries and deals are just for the benefits of country"


Opening of the identification system was done with the join of Transportation Minister ?smet Y?lmaz at Prime Ministry Undersecretary of Maritime. AIS, which will provide watching the ship traffic, analyzing and directing, was set by ANEL Telecommunication Electronic Systems (AnelTech) and Australian Business Partner Australian Maritime Systems (AMS). In the ceremony of opening, Y?lmaz gave a plaque to AMS Vice General Manager John Davis and ANEL Group Chairman of the Board of Directors R?dvan Çelikel.

Y?lmaz said at his speech: "System was supposed to be completed at the end of 2007 but with hard works it was completed earlier than it was supposed. Y?lmaz who said: "Turkey is the only country which has AIS systems in Mediterranean Countries." continued saying "System will be using by Coast Guard Administration and Naval Forces Commandership for guarding." Y?lmaz thanking the old Transportation Minister Binali Y?ld?r?m:" This country not only belongs to Erdo?an or Binali Y?ld?r?m but also to all of Turkish people"

Seas will be under control

According to the explanation from ANELTECH, with this system Turkey, can be watching the ships travels in East Mediterranean, Aegean Sea, Black Sea in any time of the day from Ankara. With the project safety in Turkish territorial waters will rise amazingly.

The ships has weight more than 300 gross tones can be seen and reported with its name, owner, loading, target country, arrival time, length, nationality and other features on the screens of control center. Besides the rote ship follows, speed, position and anything of the ship after getting in the communication zone can be recorded. By this way both voyage safety will be increasing and the truths will be found clearly after the suspicious accidents.

This news is a total 2601 time has been read