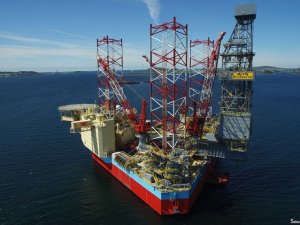 The watchdog, the Petroleum Safety Authority (PSA), said on Wednesday it had given its consent to Aker BP to use the Deepsea Nordkapp rig on the Alvheim field and the Maersk Integrator rig on the Ivar Aasen field.

The Odfjell Drilling-owned Deepsea Nordkapp semi-sub will be used for production drilling on the Alvheim field located in the Aker BP-operated production licence 203.

The Alvheim is a field in the northern part of the North Sea, west of Heimdal.

The field has been developed with subsea templates tied to a production ship (FPSO). Production started in 2008.

The Maersk Drilling-owned Maersk Integrator jack-up rig will also be used for production drilling but on the Ivar Aasen field located in production licence 001.

The Ivar Aasen is a field in the northern part of the North Sea, 30 kilometres south of the Grane and Balder fields. The water depth is 110 metres.

Ivar Aasen was discovered in 2008, and the plan for development and operation (PDO) was approved in 2013.

The development comprises a production, drilling and quarters (PDQ) platform with a steel jacket and a separate jack-up rig for drilling and completion. Production started in 2016.