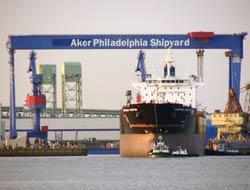 Aker Philadelphia Shipyard, a leading U.S. commercial shipyard, held a ceremonial keel laying today for Ship 013, the ninth vessel in a series of 12 product tankers being built at the yard.

Aker Philadelphia Shipyard, a leading U.S. commercial shipyard, held a ceremonial keel laying today for Ship 013, the ninth vessel in a series of 12 product tankers being built at the yard.

When completed, the 46,000 dwt tanker will be over 600 feet long and transport petroleum products on the West Coast. Following long held shipbuilding tradition, coins were placed on one of the keel blocks that supports the vessel during construction before the first section of the ship was lowered into place.

These coins are a ceremonial sign of good fortune and safe travels. The small ceremony was conducted with representatives of Aker Philadelphia Shipyard and OSG America. On behalf of Aker Philadelphia Shipyard, the next class of graduating apprentices attended the ceremony, and three of those graduates, Brian Garrett, Brandon Walls and Bryan Aber, placed coins for the yard.

Initiated in 2004, the three-year Apprenticeship Program was designed to develop the next generation of shipyard leaders. Since its inception, 168 apprentices have been hired and the program has maintained a 71 percent retention rate. Of the current graduates, special recognition was given to Brian Garrett who graduated from the current class with the highest overall average (93%), Brandon Walls, for having the highest Penn Foster average (95%), and Bryan Aber, who had no injuries during his entire employment with Aker Philadelphia Shipyard.
When construction is completed, the vessel will be sold to American Shipping Company, who in turn will bareboat charter the vessel to OSG America for use in transporting petroleum products.

The yard currently has three other product tankers under construction in the series of twelve and ten more apprentice classes at various stages of the process.

This news is a total 3123 time has been read