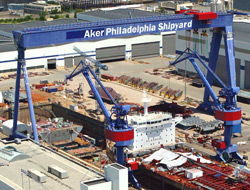 The eighth ship built at Aker Philadelphia Shipyard Inc., formerly called Kvaerner, floated for the first time over the weekend.

The eighth ship built at Aker Philadelphia Shipyard Inc., formerly called Kvaerner, floated for the first time over the weekend.

The milestone was reached in 56 fewer days than an identical vessel delivered a year ago. The ship is scheduled to be delivered in the spring. American yards usually build one-of-a-kind ships. To improve productivity and cut costs, Aker Philadelphia builds many almost-identical ships in a series.

Aker said the latest ship took 472 days from cutting the first steel to floating, compared with 528 days for the first tanker delivered a year ago. The yard assembles ships in a 1,092-foot dry dock from large modules built in indoor shops.

The dry dock is then slowly flooded, floating the ship, which is then towed to a nearby dock for installation of computer systems and other finishing work. Under a billion-dollar deal announced in April 2005, the yard is building 12 of the Veteran Class tankers at an average cost of $83 million each. It has more recently signed options for 13 more ships. These ships, completed at the rate of three per year, are being purchased by an affiliated company, Aker American Shipping Inc., and leased to Overseas Shipholding Group Inc. of New York, which charters them to oil companies.

This news is a total 707 time has been read