Algae in the way of development 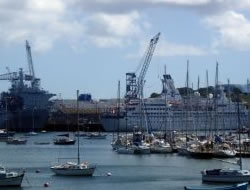 The UK?s Marine Management Organisation (MMO) announced last week that it is not allowing the application for the Port of Falmouth development initiative to proceed in its current form.

The UK"s Marine Management Organisation (MMO) announced last week that it is not allowing the application for the Port of Falmouth development initiative to proceed in its current form.

The application to amalgamate the Queens and Northern wharves was approved. A full assessment of relevant evidence in relation to a further two applications showed the proposed works would have a negative impact on the maerl beds within a significant site protected by European law. Discussions are continuing with the developers on these two applications.

Maerl is a hard, red algae that only exists in a handful of areas around the UK coast and can take up to 8,000 years to form. It acts as a nursery for commercial fish stocks, helping to promote a long term future for the fishing industry.

The rejected applications concerns capital dredging to create a deeper and straighter navigation channel and berthing pocket, and a maerl mitigation project to offset the loss of maerl habitat.

The MMO said that a portion of the proposed dredged material was likely to be contaminated and the project had the potential to have a likely significant effect on the Fal and Helford Special Area of Conservation (SAC). The MMO concluded that there were significant risks associated with the maerl mitigation scheme and major uncertainty surrounding the scientific evidence on which the proposed scheme was based. There is at present insignificant evidence to understand how maerl would respond to a relocation exercise.

Although recognising the economic benefits the initiative offers, the MMO found that the proposals did not meet the requirements of the EC Habitats Directive, as the proposed works fall within an SAC.

James Cross, acting chief executive of the MMO said, "We have met with the developers today, and invited them to come back to us with new proposals that address the environmental issues. We welcome further discussion on alternative options to help meet the needs of industry while recognising the importance of vulnerable habitats.

"Our job is to ensure our seas are clean, healthy, safe, productive and biologically diverse, and our assessment is based on all the available evidence, which is publicly available on our website. This announcement ensures protection of the ancient and rare maerl beds, considered a non-renewable resource that cannot be lost."