Algoma in for newbuilding 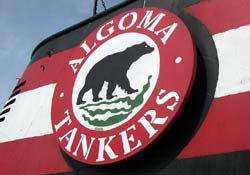 Canada's Algoma Central Corporation reports that its wholly-owned subsidiary Algoma Tankers Limited, has entered into an agreement with MedMarine Group for the purchase of a double-hulled petroleum product tanker under construction in the Eregli Shipyard, Turkey.

The vessel replaces the single-hulled Algonova which was sold in January 2007 and will operate in the Great Lakes-St. Lawrence Waterway and Atlantic Canada regions.

Delivery of the ship is scheduled for February 2008 and is expected to cost approximately $42 million.

This news is a total 1680 time has been read