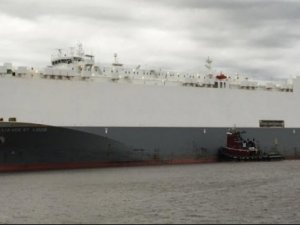 On January 16, 2017, the vehicle carrier Alliance St. Louis was under way from Texas to Florida when a pipe plug on the fuel pump for the main engine’s no. 6 cylinder came loose, resulting in fuel spray onto the engine’s hot exhaust gas pipe manifold.

The atomized fuel quickly ignited. The fire was contained to the main engine room and extinguished by the CO2 fixed fire-suppression system. No injuries were reported, but property damage exceeded $3,750,000.

The U.S. National Transportation Safety Board determined that the probable cause of fire was improper tightening of a pipe plug on the top cover of the no. 6 cylinder fuel pump housing, which resulted in a high-pressure release of marine gas oil. Contributing to the fire was the improper attachment of a fuel spray shield to the top cover, which allowed fuel to spray directly onto the cylinder’s hot exhaust pipe and ignite.

Early in the morning on January 16, the main engine’s low fuel oil inlet pressure alarm sounded, the engine room general alarm activated on the bridge and in the engineering officers’ staterooms and the vessel’s fire-detection system activated. Seconds later, the ship lost main electrical services, including power to the main propulsion and steering systems. The emergency diesel generator automatically started and came online as designed, providing power to essential equipment and the steering system.

The pipe plug was likely not sufficiently torqued into the top cover during the last inspection because the crew did not recognize this as a crucial step in maintaining the reliability of the fuel oil system. The instruction book’s section Overhaul of Top Cover Complete contributed to the crew’s lack of awareness, because it did not depict the fuel oil return passages or describe the purpose of the pipe plugs.

The last step of the top cover overhaul procedures stated, “mount the protective cap (spray shield) over the puncture valve, three drain oil pipes, return oil pipe, air pipe and safety system on the top cover.” There were openings for screwing spray shields to the top covers. However, none of the ship’s spray shields were screwed to their top cover. The spray shield on the no. 6 cylinder’s top cover was found hanging off the air pipe next to the pump housing during the post-accident inspection. It was likely knocked off the top cover by the pipe plug and spraying MGO because it was not properly secured with two screws.

A properly secured spray shield (per the manufacturer’s instruction manual) would have kept the MGO from spraying directly into the air and contacting the no. 6 cylinder exhaust gas pipe/receiver. Instead, the MGO would have sprayed into the shield and run down the fuel pump housing to the decks below where there were fewer, if any, potential sources of ignition.

Investigators found gaps in the lagging (insulation) and steel plating at every cylinder’s exhaust gas pipe/manifold interface. At the no. 6 exhaust gas manifold, the gap was approximately half an inch around most of the exhaust pipe where it joined to the manifold.

Based on fire damage, flames and intense heat burned the overhead above the no. 6 cylinder. From there, flames, smoke, and hot gas spread horizontally in all directions toward the bulkheads. The crew’s timely and effective use of the CO2 fixed fire-suppression system likely prevented the spread of the fire and minimized the extent of damage to the engine space.

This news is a total 780 time has been read
Tags: Alliance St. Louis Fire Caused By Improper Equipment Setup