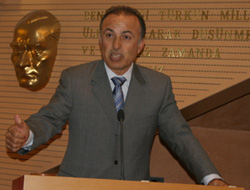 Turkish Chamber of Shipping President Metin Kalkavan reported that there is a significant recession in shipbuilding sector.

Turkish Chamber of Shipping President Metin Kalkavan reported that there is a significant recession in shipbuilding sector.

"There is a significant recession in shipbuilding sector which was in its golden age in the last years. Recession in the world market for the last 15 days followed us. In the last 6 months there are only eight orders. Our spring is over, we are in the winter anymore" said Kalkavan.

The President of Istanbul Chamber of Industry Tanil Kucuk noted that Turkey's economy will be affected from the economic crisis in the United States.

"The effects of the US-oriented global crisis will spread largely to the European countries, and its effects will be felt deeper in Turkey. The crisis in global market broke out last summer and will continue but Turkey couldn't evaluate the situation on time sufficently" noted Kucuk.

"2007 had passed with election and political crisis. Economy was not the first topic on agenda. Economy stayed background and politics again came into prominence. We as business world hoped that economy will become the main concern after the closing case over the The Justice and Development Party but we experienced disillusionment one more time" Chamber President Kucuk said.

This news is a total 1443 time has been read