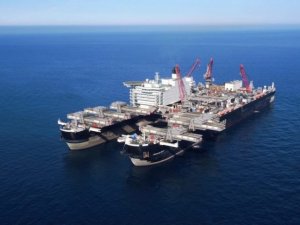 The operator of the Nord Stream 2 natural gas pipeline through the Baltic Sea has signed an offshore pipelaying contract with Swiss-based Allseas.

Allseas will undertake the offshore pipelay work for both lines in 2018 and 2019 using three pipelaying vessels, including the new Pioneering Spirit, the Solitaire and the Audacia.

The contract follows the letter of intent agreed between project operator, Nord Stream 2 AG, and Allseas last December. Other tenders including the near-shore pipelay tenders in Russia and Germany are ongoing.

“The utilisation of the dynamically-positioned pipelay vessels, which are able to carry out precise maneuvering without anchors, should ensure additional environmental protection and safety in the congested Baltic Sea. Allseas’ Solitaire previously laid parts of the Nord Stream pipeline in the Gulf of Finland,” Nord Stream 2 AG said in a press release.

Russia’s Gazprom is the only shareholder of Nord Stream 2.

This news is a total 1066 time has been read
Tags: Allseas Wins Nord Stream 2 Pipelay Contract in Baltic Sea