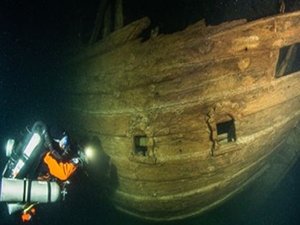 A Finnish dive team has explored and identified a rare shipwreck in the Baltic: a Dutch three-masted fluyt, a design dating back to the 17th century.

The fluyt was designed with minimum manning and maximum cargo in mind. Its rigging was laid out with pulleys for mechanical advantage, and it carried no guns, leaving additional room on board for goods. The officers and crew used the same quarters and the same galley, reducing space needed for living quarters. This economical and practical vessel class saw considerable use in the Baltic and beyond in the 1600s and 1700s, but well-preserved examples are rarely found.

The site was initially discovered by sonar survey, and it was flagged as a probable war wreck from the first half of the 20th century. However, a dive team from the Finnish association Badewanne found a wooden-hulled vessel when they visited for the first time. The wreck is substantially intact and resting on an even keel in 85 meters of water. Her hull planking is mostly in place, and many of the components that have broken loose over time - including her distinctive transom decorations - are resting on the seabed nearby. The team was able to identify its class by its shape and arrangements.

“The wreck reveals many of the characteristics of the fluyt but also some unique features, not least the construction of the stern,” said Dr. Niklas Eriksson, a marine archaeologist at Stockholm University. “It might be that this is an early example of the design."

Badewanne says that the wreck's exceptionally good condition shows the preservative effects of the cold waters of the Baltic, where lost vessels from long ago are regularly rediscovered and studied for insights into maritime history.

Iran Says U.S. to Lift All Oil and Shipping SanctionsIran said on Wednesday the United States had agreed to remove all sanctions on Iran’s oil and shipping, although Germany cautioned that major issues remained at talks between Tehran and world powers to revive a 2015 nuclear deal.

Ever Given Owners Make New Offer To Suez Canal AuthorityThe owners of a giant container ship that blocked the Suez Canal in March have made a new offer in a compensation dispute with the canal authority, a lawyer for the authority said on Sunday, as a court ruling on the case was postponed for two weeks.

HMM confirms cyber attackSouth Korea’s HMM has become another shipowner to suffer a cyber attack. The company confirmed today that it had detected an unidentified security breach, which led to limited access to the e-mail outlook system in certain areas.