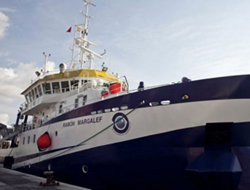 Britain is to summon Spains ambassador following what it said was a serious incursion into Gibraltars territorial waters by a Spanish research vessel.

The Foreign Office said on Tuesday that Spanish vessel the RV Ramon Margalef carried out surveying activity in British Gibraltar’s territorial waters on Nov. 18-19 for over 20 hours.

Tuesday’s dispute is the third time that Britain has summoned the Spanish ambassador in relation to Gibraltar since Spanish Prime Minister Mariano Rajoy’s government took office in December 2011.

“I strongly condemn this provocative incursion and urge the Spanish government to ensure that it is not repeated,” Europe Minister David Lidington said in a statement.

“We stand ready to do whatever is required to protect Gibraltar’s sovereignty, economy and security.”

No immediate comment was available from the Spanish Foreign Ministry in Madrid.

In September, Britain complained to the European Commission that Spain was applying “politically motivated” controls at its border with Gibraltar, causing long lines for those entering and leaving the rocky outcrop near the tip of southern Spain.

Although the commission found that there was no evidence that Spain had violated EU law in a ruling last week, the incident further strained ties between London and Madrid.

Spain, which ceded Gibraltar to Britain in a treaty three centuries ago, wants to reclaim the territory, which is currently under the jurisdiction of the UK government.

This news is a total 1263 time has been read