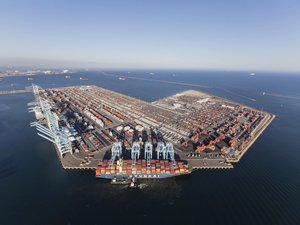 An online home shopping boom in the U.S. has sent transpacific sea freight rates to the highest on record, helping the container shipping industry in Asia.

Exports of household appliances from South Korea to the U.S. jumped 51% in August from the same period a year ago, climbing for a third consecutive month, Korea Customs Service data show.

Shipments of computers, notebooks and other associated gadgets soared 169%. The increased consumer demand has seen shipping rates on the transpacific route almost triple from this year’s low in March, when the coronavirus pandemic led to border closures and a near halt in economic activity.

With much of the world’s population housebound, demand for electronic goods and do-it-yourself items have rocketed.

Retailers and consumers alike are also thinking about the Christmas holidays, and stocking up accordingly. “The coronavirus outbreak has changed the way consumers spend money,” said Um Kyung-a, an analyst at Shinyoung Securities Co. in Seoul.

“Because they’re at home more than ever, most of the money they spend is to improve their quality of life, and that’s benefiting shipping companies.”

The spot rate to haul a 40-foot container to Los Angeles from Shanghai jumped to $3,922 on Thursday, the most since the data became available in mid-2011, according to Drewry World Container Index.

The levy hit a low for 2020 of $1,318 on March 12. South Korea’s biggest shipping company, HMM Co., is sailing an extra vessel that can carry 4,600 20-foot containers on Sept. 30 to Los Angeles from Busan at the request of local clients, it said in response to questions from Bloomberg.

“With Black Friday and the Christmas holiday coming up, the outlook for the container shipping industry looks good until the end of this year, and even until January,” Um said.

This news is a total 3299 time has been read
Tags: transpacific trade, u.s. ports