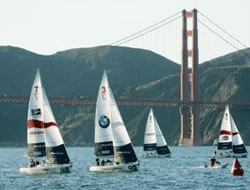 Under threats of losing a world-class yachting event that some say will pump billions into the Bay Area economy, San Francisco is poised today to approve a plan hosting the 34th America?s Cup race.

Under threats of losing a world-class yachting event that some say will pump billions into the Bay Area economy, San Francisco is poised today to approve a plan hosting the 34th America"s Cup race.

The agreement approval is expected despite weekend reports that the terms raised concerns from members of billionaire Oracle CEO Larry Ellison"s BMW Oracle Racing team. Ellison"s team, having won the cup in February, chooses who will host the event in 2013.

The City originally proposed a race location along the central waterfront, with main race facilities south of the Bay Bridge, but is now putting forth a proposal that would locate the race at the northern waterfront between Piers 19 and 29.

The agreement includes the team"s making $55 million in port property improvements in exchange for development rights of up to 75 years for Piers 30-32 and Seawall Lot 330. It eliminates the initial proposal of handing over development rights to Pier 50.

The second location has garnered more support from city officials because it is less expensive for San Francisco.

Race officials were said to be meeting with city brass Monday afternoon to further discuss their concerns with the northern waterfront location. They have also reportedly met with Rhode Island about possibly hosting the cup should San Francisco"s deal fall through.

The event is projected to inject at least $1.2 billion into the local economy and create nearly 9,000 jobs.

Brad Benson, the Port"s special project"s manager, said the team"s "underlying concern ... is the desire for some certainty."

"Waterfront development is a highly uncertain process. We have future approvals that are required down the road. It seems that the team is trying as much as it can to try and gain more certainty in the agreement," he said.

The team is expected to make a host selection by Dec. 31, and imposed a Friday deadline for San Francisco to approve an agreement.

The Board of Supervisors Budget and Finance Committee approved the northern waterfront proposal Monday. The full board is expected to vote on the proposal today.

This news is a total 9388 time has been read