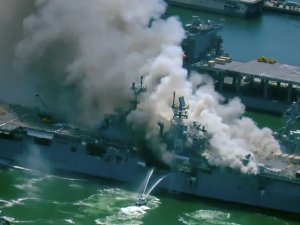 One person was treated for smoke inhalation after an explosion and fire Sunday on board a ship at Naval Base San Diego.The blaze called in shortly before 9 a.m. on the USS Bonhomme Richard.

Details remain limited, but the Wasp class amphibious assault ship USS Bonhomme Richard (LHD-6) is burning pier-side at Naval Base San Diego. Aerial footage shows thick smoke billowing from the ship's hangar deck as firefighting crews have moved in to try to halt the blaze. Reports state that an unknown number of sailors have been hurt as a result of the fire.

Fire crews from across San Diego have been called in to fight the fire, which some sources state emanates from below the waterline. Loud booms have been heard coming from the ship, but it isn't clear what exactly is causing them.

The last major pier-side incident for a U.S. Navy ship in San Diego occurred when disaster struck at the nearby NASSCO shipyards in 2018 when one of the dry docks holding the still under construction USS Miguel Keith flooded, causing significant damage to the vessel.As for other major U.S. Navy fires, this could end up being the worst one since the arson fire that struck the Los Angeles class nuclear fast-attack submarine USS Miami in 2012.

Unlike that vessel, Bonhomme Richard is conventionally powered, but is one of just nine big-deck amphibious assault ships within the Navy's inventory.

It is a strategic and very costly asset that provides major air and amphibious power projection when operating abroad.A fire on China's new and quite similar Type 075 amphibious assault ship occurred last April, which drew negative attention from the international press.

Evidence of the fire was quickly covered up by crews that literally painted over the smoke damage just hours after it occurred.

Sailors have been hurt in a fire aboard amphibious warship USS Bonhomme Richard (LHD-6) that’s docked the pier at Naval Base San Diego, Calif., local officials said on Sunday.

“The fire was called away at approx. 8:30 AM, July 12,” read a statement on Twitter from Naval Surface Forces. “160 Sailors were aboard at the time. Bonhomme Richard is going through a maintenance availability and has a crew size of approx. 1000. 18 Sailors have been transferred to a local hospital with non-life threatening injuries.”

According to the San Diego Fire Department, several sailors are being treated for injuries and local news has reported explosions from the fire.

Prior to arriving in San Diego in 2018, Bonhomme Richard spent six years in Japan as part of the U.S. Forward Deployed Naval Force.

This news is a total 1221 time has been read
Tags: Amphibious Assault Ship, USS Bonhomme Richard, Is On , Fire At Naval , Base San Diego