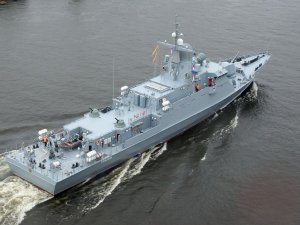 "I am glad that the laying of new ships has become regular. We have recently handed over to the customer the Ostap Sheremeta supply vessel to service shelf oil platforms. We prove that the shipyard is alive and can produce military and civilian ships," shipyard CEO Vladimir Kulakov said.

"The third corvette for the Pacific fleet means the shipyard can build any series of warships, including ten corvettes of project 20380 which are necessary in the Pacific Ocean," Russian Pacific fleet Deputy Commander Igor Korolev said.

The Karakurt class, Russian designation Project 22800 Karakurt, is a small missile corvette in Russian designed for the Russian Navy by the Russian Company Almaz Design Bureau. The project of this corvette was unveiled during the International Military-Technical Forum «ARMY-2015», defense exhibition near Moscow.

The Project 22800 Karakurt-Class guided-missile corvette will be used to perform anti-surface and anti-air warfare, as well as coastal surveillance missions in littoral zones.

The main armament of the Karakurt-Class will include Kalibr-NK cruise missiles fired from an eight-tube UKSK vertical launching system (VLS). The 3M-14T Kalibr-NK is a land-attack cruise missile carried by Russia’s surface vessels. Reports put its max range at 1,500 – 2,500 km.

The Karakurt-Class is also armed with an AK-176MA 76.2mm automatic gun located on the forward bow deck, an upgraded variant of the AK-176 naval gun. It can fire at a rate of 150rpm and can engage targets within the maximum range of 15 km.