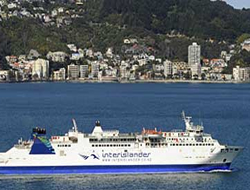 New Zealands Interislander, the marine wing of state-owned KiwiRail, has suffered a perfect storm of having to withdraw a key ship right at the start of the summer season.

The news that the RoPax ferry ‘Aratere’ will be offline for several months has led to howls of protest from government and the media. After a chain of incidents involving the ship it is hard to disagree with them.

Safely alongside in Wellington, divers went down to examine the shafts to ascertain the damage. Interislander’s worst fears were confirmed. Not only was a new starboard propeller required, but so too a new shaft.

The company’s flagship ferry ‘Kaitaki’ recently completed an extensive refit at Forgacs in Brisbane. However that dry dock is now closed, which means the recently lengthened ‘Aratere’ (at 183 metres) is now faced with a long single-engine passage to Singapore or Chile for repairs.

In the interim, the ‘Arahura’ has taken over the damaged ship’s roster in an effort to keep passengers and freight moving. But she is significantly smaller, especially since Interislander removed a large accommodation block to increase vehicle deck capacity.

As the realisation of the serious reduction in capacity on the sea link between New Zealand’s North and South Islands began to hit home, KiwiRail chief executive Jim Quinn was rejecting media speculation that the problems were caused when the ship was lengthened two years ago, saying the driveshafts and propellers had not been affected by the work.

“They’re in the same part of the ship as they always were. They were not moved, no disruption to that in the fitout. It doesn’t make sense to me that this is the issue,” Mr Quinn said.
Becoming rather colourful, Mr Quinn was quoted as saying, “We don’t know the bloody answer to this, that’s the problem. Speculating isn’t going to help. The answer will be the answer whatever it turns out to be, and we just have to get to that point.”

Speculation of course is not going to help, however I am bound to wonder if the problem is down to increased torque on the shafts following the lengthening – a project that has already caused the company much heartache and unwelcome media attention?

Since the NZ$53.8 million (US$44.4 million) refit and lengthening in Singapore in 2011, the ‘Aratere’ has suffered numerous problems. These include engine problems, a mooring failure causing a bollard to be catapulted into her side, a rat infestation and broken toilets. In November 2011, Maritime NZ ordered the ship to stop operating until all issues had been rectified.
New Zealand First Leader Winston Peters wasted little time in politicising the problems, claiming the ‘Aratere’ was a disaster waiting to happen. Mr Peters claimed the ship also had problems flexing in heavy seas as well as issues with ballast, stabilisers, radar and doors not closing properly.

Marine and Transport Consultancy director Rod Grout said the incident came as no surprise. Formerly chief executive of shipping firm Pacifica, Mr Grout said he repeatedly questioned the wisdom of spending tens of millions to lengthen the ship a few years ago.

While the finger pointing continued, the main concern of Interislander general manager Thomas Davis was to keep things moving on the Strait. With no chance of chartering a replacement ship in time for the peak summer season, nor the possibility to at least run the ‘Aratere’ on one engine with freight only, the company was left working through limited options.

Initially the priority was to ensure passengers and freight booked to travel on the ‘Aratere’ was accommodated on alternative sailings. While this was being done, the Interislander website and call centre were unable to take new bookings or change existing bookings. A new timetable that provides enough capacity to accommodate customers was put in place and remains until the ‘Aratere’ is back in full operation.

From Thailand comes the news that six tourists were lost when an overcrowded tourist ferry capsized and sank near a popular seaside town. The rest of the roughly 200 people aboard were rescued.

The ferry, carrying Thai and foreign tourists, left Lan island for the 30-minute trip to the resort town of Pattaya, 100 kilometres south-east of Bangkok, on November 3. Shortly after the vessel left port, the ferry suffered engine problems. Fumes and exhaust from the engine forced passengers from the lower deck onto the second deck. The ferry soon lost stability and capsized onto its side before sinking. Local media reports said the ferry was operating over her capacity of 130 passengers.

Somewhat more pleasant news from the Irish Sea where Irish Ferries have responded to Ireland’s economic improvement by bareboat chartering the Visentini-built RoPax ‘Epsilon’ to supplement its existing services.

Built in Italy in 2011, the 24-knot vessel will provide two additional round trips daily, bringing the company’s Dublin-Holyhead schedule to a maximum of twelve sailings per day.

The vessel will also provide opportunities for improved annual dry-dock cover within the Irish Ferries fleet along with scope for increased capacity on other Irish Ferries routes. The ‘Epsilon’ will provide significant vehicle capacity along with modern on-board facilities including cabins, a bar/cafeteria and a self-service restaurant. The vessel has capacity of 2,860 lane metres (approximately 170 trucks) and for 500 passengers.

This news is a total 1904 time has been read