Angola's President to Meet with CEO of Eni 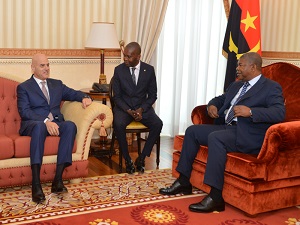 During the meeting with President João Lourenço, Claudio Descalzi said that they discussed the participation of the Italian multinational in the studies and exploration of crude oil and in other sector-related projects. ENI plans to spend billions of dollars in exploration and development of new offshore areas next year, he has informed.

In the sidelines of the meeting, Eni and Sonangol signed an amendment of Block 15/06 Production Sharing Contract which defines the new perimeter of the block, now covering an additional area of 400 km2 on the west side. This is in line with Eni strategy to increase exploration activities in the country, chasing opportunities nearby the existing producing hubs.

Following the discovery of Kalimba 1 in June 2018, Eni set up an accelerated exploration program and already started the drilling activities with a schedule of 4 exploration wells. In the event of success, this strategy will enable a fast-track development of these new resources, leveraging on synergies with existing infrastructure and significantly reducing their time-to-market.

The developed fields Sangos, Cinguvu, Mpungi, Ochigufu e Cabaça S.E. are tied back to the 2 FPSO installed in the block, Ngoma and Olombendo, with an overall oil treatment capacity of 200 kbopd. Ngoma and Olombendo FPSO started production in November 2014 and February 2017 respectively.

Eni’s partnership with Sonangol also includes activities in the downstream sector, to improve the efficiency of Luanda Refinery and to support development of future plants, as well as gas exploitation and renewable energy projects.

Eni has been present in Angola since 1980. Equity production amounts to 150,000 barrels of oil equivalent per day. The extension of Block 15/06 contractual area positions Angola as one of the core countries in Eni's exploration growth strategy.

This news is a total 1204 time has been read
Tags: angola, eni, joão lourenço, claudio descalzi, oil and gas 750 boxes fall off Maersk ship during another Pacific stormMaersk has confirmed another case of bad weather in the Pacific has knocked hundreds of boxes from one its ships.