Antalya port will be popular 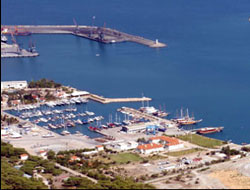 A new project has been launched in an effort to make Antalya a brand in cruise tourism.

At least 120,000 European tourists could visit the port of Antalya every summer

A new project has been launched in an effort to make Antalya a brand in cruise tourism.

Efe Hatay, director general of Port Akdeniz Antalya, said that at least 120,000 European tourists could visit the port of Antalya every summer season, starting from 2010, if the new project were to be realized.

Hatay said such a project would make a remarkable contribution to Turkey's economy as mainly wealthy European tourists traveled on cruise liners. He also said that Europe's biggest cruise liner, Poesea, which belongs to the cruise line MCS, would arrive at Port Akdeniz Antalya for a trial run on Nov. 20. "Antalya has the potential to increase cruise tourism. Only 40 to 45 cruisers visit the port every year. Our goal is to increase this figure to 100," Hatay said.

There is also another option, as Hatay stated last week, if this plan does not work out. He said the capacity of the port in Antalya would be expanded to provide an alternative harbor for ships slated to dock at the busy Port of ?zmir, thus redirecting trade towards the city.

This news is a total 5376 time has been read