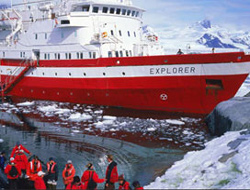 A dramatic sea rescue took place after a cruise ship hit an iceberg in the Antarctic Ocean and began to sink. More than 150 passengers and crew were loaded into lifeboats.

A dramatic sea rescue took place after a cruise ship hit an iceberg in the Antarctic Ocean and began to sink. More than 150 passengers and crew were loaded into lifeboats.

Two passenger boats in the area were picking up the 154 occupants of the Explorer from the lifeboats they used to escape the ship, which ran into problems near the south Shetland Islands.

"Everyone is safe and accounted for," Susan Hayes, a spokeswoman for ship owner Gap Adventures, told CNN.

"Apparently they crashed into an iceberg," Pedro Tuhay, of the Argentine coast guard, told local radio as operations continued to save the vessel.

"The boat's got a 23-degree list, but it's keeping steady very well."

"The ship was traveling out of Ushuaia in Argentina, traveling southbound to Antarctica, and off King George Island it hit some ice and began taking on some water," Hayes said.

She said 13 Americans had been on board, as well as British, Canadians, Australians, Dutch and other nationalities.

The Explorer usually makes two-week cruises around the Antarctic, costing around $8,000 per cabin.

The South Shetland Islands lie about 75 miles north of the Antarctic Peninsula. They have been part of the British Antarctic Territory since 1962, although they are also claimed by Argentina and Chile.

Cruise trip travel has grown in Antarctica in recent years and Tuhay said 52 cruises were expected at the southern port of Ushuaia during this year's peak season from October to April. 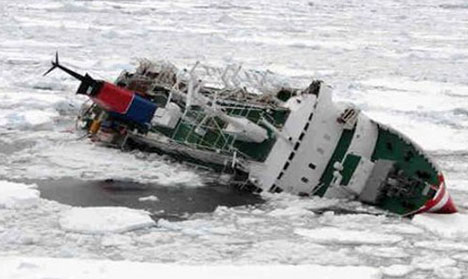 This news is a total 1882 time has been read