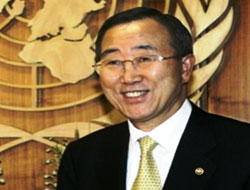 United Nations Secretary General Ban Ki-moon has pledged his support for an extension of the mandate.

United Nations Secretary General Ban Ki-moon has pledged his support for an extension of the mandate, given in United Nations Security Council resolution 1816 (2008), enabling States co operating with the Transitional Federal Government of Somalia to enter the country's territorial waters and use all necessary means in order to repress acts of piracy and armed robbery at sea, consistent with relevant international law.

IMO Secretary-General Efthimios E. Mitropoulos wrote to Mr Ban last month proposing that the mandate be extended. Mr Ban has now confirmed that he supports the proposal and will be conveying the same to the Security Council, together with the concerns expressed by IMO and international shipping and seafaring organizations.

In a letter to Mr Mitropoulos, Mr Ban said he remains "seriously concerned" about the dangers posed by piracy in the Gulf of Aden and was "acutely aware" of its impact on the ability of the United Nations to deliver humanitarian assistance to Somalia.

He also said he was encouraged by the Security Council's adoption, on 7 October 2008, of resolution 1838 (2008) on this issue. Mr Ban added, "We must do more and act quickly to fight this terrible scourge.

Mr Ban's letter came just days after a meeting at IMO, held at the invitation of Mr Mitropoulos, and involving the heads of the four shipping industry bodies known collectively as the Round Table (BIMCO, ICS/ISF, INTERCARGO and INTERTANKO), and the International Transport Workers' Federation (ITF) expressed its own support for an extension of the mandate.

This news is a total 2093 time has been read