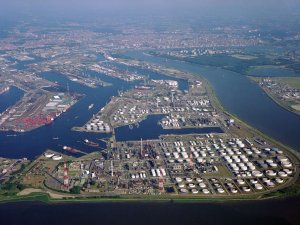 Traffic to and from Antwerp, Europe's second-biggest port, was halted on Monday after a container ship ran aground on the banks of the river Scheldt which connects the port to the North Sea.

A spokeswoman said workers were trying to tow the 366-metre CSCL Jupiter away but could not say when this would be completed.

"We're heading for low tide in the coming hours, that does not make things easier," the spokeswoman said.

Covering a space of 20,000 football fields, the port of Antwerp is the 15th largest container port in the world and handles 214 million tonnes of maritime freight each year.

This news is a total 690 time has been read
Tags: Antwerp Port Blocked as Boxship Runs Aground