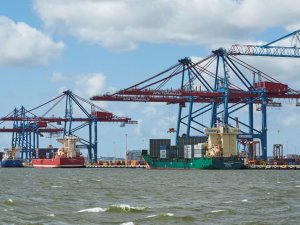 APM Terminals Gothenburg has served a notice of termination to 160 staff members, out of a total of 450 employees, due to “a sharp fall in volumes over the past year”.

The port operator said that, once the redundancy negotiations are completed, operation will be run on a two-shift basis without night-time service. In total, 450 people work at APM Terminals Gothenburg.

“This has been a difficult but necessary decision. We are in a critical situation, where targeted blockades and strikes have been crippling our operation for over a year now, and where we have lost several of our customers. We are now faced with the necessity of winning back confidence and reshaping our operation to the current volume,” Henrik Kristensen, CEO of APM Terminals Gothenburg, said.

APM’s the container terminal in Gothenburg was hit hard by a series of industrial actions over the past year. Nine days were lost to strikes and 14 trade union blockades following one after the other were organized during the period, resulting in a drop in volumes.

APM Terminals Gothenburg added that it “has accepted every proposal that the mediators, selected by the Swedish National Mediation Institute, have made to solve the dispute.”

“For our long-term survival, we see no other option than to make major changes to our operation, win back the confidence of customers and be a stable employer for the benefit of our workforce and our owners,” Kristensen added.

“Our objective is that the negotiations will take place promptly and we hope to complete them within a couple of weeks, so that we can then inform the members of staff affected. This is a very distressing but unavoidable situation. We will try to make the process as sympathetic as possible,” Sophia Tuveson, HR & Negotiations Manager at APM Terminals Gothenburg, said.

This news is a total 613 time has been read
Tags: APM Terminals Gothenburg to Lay Off 160 Workers