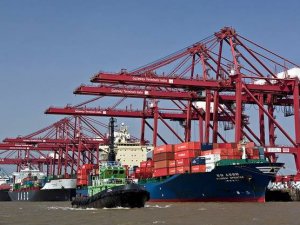 APM Terminals Mumbai, India handled a record 2.3 million TEUs during its 2017-2018 financial year. This is the terminal’s highest volume since the terminal was built in 2006.

The terminal received over 633 vessels over the course of the year.

Commenting on the achievement, Ravi Gaitonde, Managing Director of APM Terminals Mumbai said, “This success is a result of the cooperation extended by the entire trade community including the cargo owners, Container Freight Station operators, transporters, rail operators and the port and customs authorities. We are continuously looking for ways to improve our service offering and increase the efficiency of the terminal to remain terminal of choice for our customers.”

This news is a total 691 time has been read
Tags: APM Terminals Mumbai Handles Record Volumes