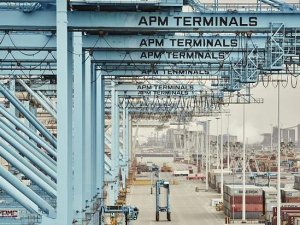 Terminal operator APM Terminals Gothenburg has decided to implement a partial lockout at the container terminal in response to the planned industrial action by members of the Swedish Dockworkers Union (SDU).

The measure is intended to protect operations at the terminal from the most recent threats of industrial action against the company by the SDU, the terminal operator said.

Consequently, port employees working the evening shift will be excluded from the workplace from 16:00 and not receive any salaries for their work, the union informed.

“We have done everything in the last year to solve the conflict with the Swedish Dockworkers’ Union…The steady deterioration in the situation cannot go on, and in order to protect the business APM Terminals Gothenburg is taking protective action against the latest series of planned industrial action,” Henrik Kristensen, CEO of APM Terminals Gothenburg, commented.

During the past six months, APM Terminals Gothenburg has allegedly seen productivity decline by approximately 20 percent of normal weekly capacity. This is equivalent to around 2,000 containers every week.

“We see no alternative solution to this dispute other than a withdraw of current industrial actions and entering a long-term agreement including a period of time without any industrial actions. We also need an amendment to the legislation in such way that an employer who has a collective bargaining agreement (CBA) cannot be subjected to blockades or other industrial action by a trade union, who does not hold a CBA,” Kristensen added.

As explained by the APM Terminals, last week SDU cancelled their planned strikes and overtime blockade to sit down in a meeting with APM Terminals together with Jordi Aragunde president of IDC.

However, the meeting did not result in any kind of agreement as SDU and IDC came to the meeting demanding that a new agreement be signed on the spot, while the terminal company saw the meeting as “a first step towards a negotiation together with the National Swedish Mediation Institute.”

“We need to be able to focus on recovering our business and developing our services instead of cutting staff, which is the unfortunate consequence of the disturbances in our service that the conflict results in,” the company management said in a customer advisory.

“The way forward is via dialogue, where the outcome of the discussions must follow the Swedish model and arbitrary law, and ensuring that such negotiations are made via the National Swedish Mediation Institute. Only then can we ensure that the agreement will not be discarded by Labor Arbitration Court and resulting in fines and that the agreement is annulled. An agreement outside the Swedish arbitrary law would only be a short-term solution and lead to further conflicts in the future,” the advisory further reads.

Separately, the SDU said it understands that APM Terminals has the legal right to lock out their employees “but expects management to take responsibility for their own actions”.

Furthermore, the SDU said it is open to all kinds of collective solutions at the terminal and rejects APM Terminals’ claim that the union refuses to sign the CBA.

The conflict, caused by a change in APM Terminals’ personnel policies, has been ongoing since spring 2016.

Last month, the terminal operator started with layoffs and the implementation of new work patterns. The measures have been reportedly implemented without discussion with the SDU.

This news is a total 771 time has been read
Tags: APM Terminals Plans Partial Lockout at Gothenburg