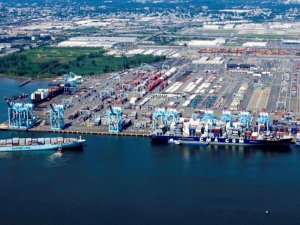 These vessels are expected to start calling the port right after the heightening of the Bayonne Bridge is completed later this year, which, combined with the widened Panama Canal, will allows these ULCV liner services to call and be operated efficiently at the advanced APM Terminals facility.

Further investments include an expanded gate complex, upgrades to container handling equipment and other operational improvements.

“Our goal is to make APM Terminals Port Elizabeth safer, easier to use and faster for our trucker community, more productive for our shipping line clients and more reliable for our clients’ supply chains expectations,” Wim Lagaay, President of APM Terminals North America, said.

“These operational and infrastructure improvements are designed to keep APM Terminals Port Elizabeth at the forefront of the New York/New Jersey harbor by being the container terminal of choice to work with by our many clients and partners,” Lagaay added.

APM Terminals’ Port Elizabeth facility is one of the largest container terminals in the port complex, handling over 2,100 trucks a day, 4000 terminal gate transactions and more than 500 vessel calls per year. The current capacity of 1.5 million TEU will be expanded to 2.3 million TEU, with berth expansion to accommodate three simultaneous ULCV calls.

This news is a total 748 time has been read
Tags: APM Terminals to Prepare Port Elizabeth for ULCVs